What Role Can IoT Play in Tactile Internet?

We are witnessing the unprecedented growth of mobile devices with seamless connectivity and high-speed mobile broadband Internet in almost every aspect of the digitalized world. In the coming years, we envision the next form of cyber-physical systems with an advanced and sophisticated tele-operation, termed as Tactile Internet.

Before we discuss what Tactile Internet is, let us look at the ongoing research efforts in today's communication and networking technologies. We are now familiar with ultra-reliable and low-latency, massive connectivity, and machine-type communications in 5G communication systems. Tactile Internet will take a step forward to perform nearly real-time tele-operation and manipulation of remote physical or virtual objects while delivering human and machine skills. Compared to the content-centric mobile broadband Internet services, Tactile Internet aims to provide audio-visual, and haptic interactions for real-time steering and control of these remote physical or virtual objects. Some of the promising examples of Tactile Internet ranges from remote surgery, remote automation, remote driving, to remote learning and education. In August 2014, the International Telecommunication Union (ITU)-Technology Watch Report already sketched the opportunities for emerging technology in business and societies with the emergence of Tactile Internet -- which is envisioned as the next wave of innovation.

The overall architecture of TI consists of three domains: a) master domain, b) controlled domain, and c) network domain. The master domain, in general, consists of human and/or machines operators. For the human operator, there is a human-to-system interface to convert human input to haptic input and also provide tactile (touch, surface texture, and friction) as well as kinaesthetic (position, velocity, force, and torque) feedback to the human. The controlled domain mainly consists of remotely operated robots-actuators, and sensors (that provide data to the master domain). This bi-directional haptic interaction is transmitted over the reliable and low-delay networks, either wireless or wired. These three domains generally form a close-loop with haptic feedback and control commands. 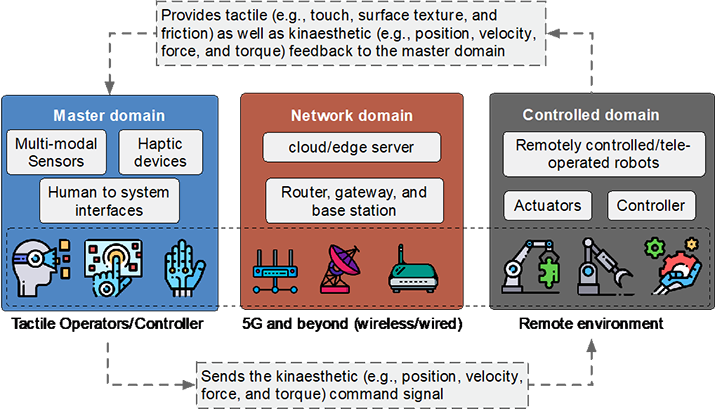 Novel Development in Cross-Technology is Essential for the Tactile Internet

Although the realization of Tactile Internet is in its infant stage, many disruptive technologies are yet to be advanced. It is, indeed, nearly impossible to meet such carrier-grade latency, reliability, and availability for the Tactile Internet with ultra-low latency tele-operation. Even with fully-optical fiber communications, we cannot go beyond 150 km away with 1 millisecond delay, although ignoring other delays involved in data collection, processing, and analyzing. Therefore, it remains an open question to address these challenges for investigating advances in cross-technology in Tactile Internet- the novel development not only from the networking technologies, but also from the hardware for haptic interfaces.

Due to the massive connected IoT devices, a huge resource pool of advanced sensing and lightweight data transportation combined with a smart way of data collection and management is being created. However, it is difficult to obtain straightforward benefits from IoT in Tactile Internet. The main reason is that most of the IoT applications are delay-tolerant, therefore, a tradeoff is often made between latency and capacity (number of connected devices). However, Tactile Internet cannot relax the end-to-end latency at any circumstance. Another important factor is that the sensor data in many IoT application is error and loss tolerant. However, carrier-grade reliability and availability in the tele-operator services cannot tolerate any data loss, even 1 packet out of 105.

It is clear that Quality-of-Service (QoS) in Tactile Internet is very different from IoT.

One basic similarity between IoT and Tactile Internet is that due to the nature of haptic devices -- being a low-power and resource-constrained like IoT end-devices -- it remains a challenging task how the local data processing and network management can be executed in Tactile Internet.

In fact, we could envision that the context-aware computation in IoT will become an integral of the Tactile Internet architecture design. The main reason is that, a significant amount of “intelligence” must be given to the domains of Tactile Internet. The collected data from the IoT infrastructure enable to develop this intelligence -- refers to “edge intelligence”. This is one of the viable ways to provide carrier-grade reliability and real-time operations for Tactile Internet -- by analyzing a large amount of historical data, thereafter, learning the dynamics of the remote environment and predicting the human command in advance in Tactile Internet.

Thus, one fundamental question arises: “How could we leverage the enormous ambient Intelligence in IoT ecosystem to facilitate the development of Tactile Internet without any dragging the carrier-grade reliability, latency, availability of Tactile Internet to the IoT domain?”

Mithun Mukherjee is an assistant professor with the Guangdong Provincial Key Laboratory of Petrochemical Equipment Fault Diagnosis, Guangdong University of Petrochemical Technology, Maoming, China. His research interests include fog computing, Tactile Internet, and ultra-reliable low-latency communications. He has (co)authored more than 80 publications in peer-reviewed international transactions/journals and conferences. Dr. Mukherjee was a recipient of the 2016 EAI WICON, the 2017 IEEE SigTelCom, the 2018 IEEE Systems Journal, and the 2018 IEEE ANTS Best Paper Award. He has been an associate editor for the IEEE Access and a guest editor for IEEE Transactions on Industrial Informatics, ACM/Springer Mobile Networks and Applications, and Sensors. He is a regular reviewer for many prestigious journals and conferences and serves as the TPC member for various conferences. He completed his Ph.D. from the Indian Institute of Technology Patna, Patna, India, in 2015. He is a member of IEEE.

Qi Zhang received the M.Sc. and Ph.D. degrees in telecommunications from Technical University of Denmark (DTU), Denmark, in 2005 and 2008, respectively. She is an Associate Professor with the Department of Engineering, Aarhus University, Denmark. Besides her academic experiences, she has various industrial experiences. Her research interests include Tactile Internet, IoT, URLLC, Mobile Edge Computing, Massive machine type communication, Non-orthogonal multiple access (NOMA) and compressed sensing. She is serving as an Editor for EURASIP Journal on Wireless Communications and Networking. She was a Co-Chair of the Co-operative and Cognitive Mobile Networks (CoCoNet) Workshop in the ICC conference 2010-2015 and was a TPC Co-Chair of BodyNets 2015.