The internet is evolving from a communication platform that provides access to information "anytime" and "anywhere" into the Internet of Things (IoT): a network that integrates "anything" by gathering and disseminating data from the physical world to enable a better understanding of our environment. IoT allows us to make inferences about phenomena and take mitigation measures against unwanted environmental effects.

IoT fulfills all the technological requirements to be successful in developing countries: it is low power technology (good for places with unreliable power supply), it does not require a fast internet connection (nodes are sending small amounts of data, and servers can be local), it is low-cost (or getting there) and it has an immediate impact on people’s lives.

Applications of the Internet of Things can greatly benefit populations in developing countries: weather can be monitored, food safety can be checked, water quality can be analysed, air quality can be measured, landslides can be detected and mosquitoes can be counted in cities in real time. Furthermore, cheap e-health kits can be shipped to the isolated areas of the developing world to bridge the healthcare gap between urban and rural settings. The picture below showing sensor nodes that publish their data openly on the internet (as searched by https://www.thingful.net/) reveals a visibility gap where the North is scattered with nodes while the South is poorly represented. Africa, for example which is home to 1 billion people, has very few sensors. 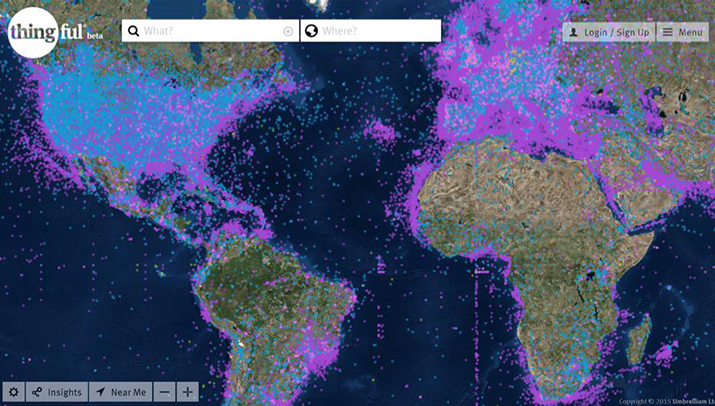 To realize the benefits offered by IoT, a broad portfolio of successful deployments are needed as a proof of concept. It is important that the deployed IoT networks are planned considering both the potential scientific impact as well as the one on local society. Wider dissemination is needed to engage a greater audience for IoT development activities.

To make sure the deployments are properly maintained, local capacity needs to be built. The International Centre for Theoretical Physics (ICTP, Italy), in collaboration with Network Startup Resource Center (NSRC, USA), has already organized several training activities on IoT and wireless sensor networks (WSN) in developing countries, in the past few years: South Africa in 2010, Kenya in 2011, Ghana in 2011, Benin in 2014, Indonesia in 2012, Thailand in 2014, Japan in 2014 (for ICT4D students), Nicaragua in 2013, Ecuador in 2014. Rwanda and Costa Rica are planned for 2015.

After the workshops, participants have developed some interesting ideas. In South Africa two students developed a pollution monitoring system to be installed on public buses. The system measures air quality and position via GPS, and sends the readings to a server via SMS. The air quality is visualized on Google Maps as shown in real time. In Kenya, a PhD student developed a low cost weather monitoring system to be used in rural areas. Building upon the training received in Cape Town in 2010, one of the participants from Malawi developed an irrigation system that reduces water consumption. From the workshop organized in Ghana emerged the idea of a joint project to develop an air pollution monitoring system including the effects of the Harmatan wind. The training in Thailand allowed researchers to study the effects of water temperature and oxygen on fish growth.

While high-end equipment is too expensive for hands-on training for scientists and engineers of the developing world, the emergence of off-the-shelf low cost sensor network equipment has enabled a new training model where knowledge is acquired on real devices. This model also allows scientists and engineers, both students and professionals, to be exposed to engineering design by having planning and configuration combined with fine-tuning of equipment during the training period to meet deployment requirements. The use of IoT will also enhance Computer Science curricula in academic institutions of developing countries. Long-term data from sensor networks will be valuable for educational purposes and the associated tools for curricula development should be encouraged.

As the problems tackled by IoT practitioners in developing countries fall into a limited number of categories (air quality, water quality, smart agriculture, healthcare, etc.), it is paramount to establish a network of IoT scientists/practitioners working in this domain. The network will provide a way for researchers to share solutions and to collaborate on finding the best solution to their problem.

We advocate the use of IoT for Development as this technology has many applications that can greatly benefit poor communities (water quality monitoring, intelligent irrigation, landslide monitoring and many others). At the same time it can help bridge the scientific divide by providing an affordable way for researchers to study the physical environment.

Marco Zennaro received his Electronic Engineering degree from Universita' di Trieste, Italy and his PhD from KTH-Royal Institute of Technology, Stockholm, Sweden. His PhD thesis was on "Wireless Sensor Networks for Development: Potentials and Open Issues". He is now a Researcher at the Abdus Salam International Center for Theoretical Physics (ICTP). His research interest is in ICT4D, the use of ICT for Development. In particular, he is interested in Wireless Networks and in Wireless Sensor Networks in Developing Countries. He is the editor of wsnblog.com and co-author of the Wireless Networking in Developing Countries (www.wndw.net) book.

Antoine Bagula received the MEng degree in Computer Engineering from Catholic University of Louvain (UCL) in Belgium and the MSc Degree in computer science from the University of Stellenbosch in South Africa. He obtained a PhD in communication systems from the KTH-Royal Institute of Technology in Sweden. He is now an Associate Professor at the University of the Western Cape, in South Africa. The focus of his research is on the design, analysis and control of intelligent telecommunication systems and their integration into the emerging ubiquitous networks. His current interests include the modelling, optimization, performance evaluation, and implementation of RFID, sensor/actuator networks as well as next generation IP/optical networks. Besides his strong involvement in research at the academic and industry levels, Prof Bagula is currently involved in training, innovation and technology observation activities in developing countries.