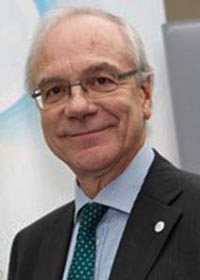 Roberto Saracco is a senior member of IEEE where he leads the Future Directions Committee and he publishes a blog with daily posts on advances in science and technology. He is the president of EIT ICT Labs Italy and Italy Node Director, EIT (European Institute of Innovation and Technology). As an Internet of Things (IoT) expert, he discusses how devices such as wearables will develop similarly to smartphone applications, where IoT innovation will come from and some of the key technological challenges.

Question: Consumers have an expectation that electronics such as smartphones will become cheaper or at least improve while staying at the same price. How does this create challenges for companies looking to create the next generation of IoT devices such as wearables?

Saracco: What’s great for individuals and small companies today is that everything is cheaper and to a certain extent easier, including the tools needed to make a product. In the past, it was impossible for a small company to create a complex product or service and market it. Now it’s become feasible to design, prototype and test a chip using services over the Internet. The other side of the coin is that there’s more competition. Put this all together and you can bet for increased offer that in turns will stimulate demand. This is what is happening in the smartphones and apps ecosystem and I look forward to see something similar in the IoT domain.

Question: Can a smaller company stand out in a crowded market for wearables?

Saracco: There are plenty of niches. And these niches can be attacked by using creativity. It’s similar to smartphone applications. There are more than one million apps in the Apple App store and as many available for Android. Only a few of them catch the attention of everyone. But with a few evangelists promoting a good app, suddenly it can have thousands of users. My bet is that we’ll see the same kind of explosion with wearables and services they support.

Question: There are a lot of different pieces in an IoT device – chips, memory, communications and power. Of these, what is the most challenging?

Saracco: The area requiring the most research is power. With devices that can be embedded in the fabric of clothing, for example, there’s a lot of technology evolution that’s required. Potentially, energy could be harvested from ambient electromagnetic field, but in most instances the power demand is still too big to be supported by scavenging and scavenging technologies are not efficient enough, so progress will require a lot of engineering. Power is a critical challenge because it affects the usability of devices. People don’t want to be bogged down by having to recharge a device every few hours, and very often they forget, so it doesn’t work when they need it.

Question: Where do you think innovation in wearables and IoT will come from?

Saracco: I expect to see it everywhere, but basic technology innovation will definitely fall out of military progress. That’s where the big investment is. Also, you have a lot of people looking to invest in medical applications. There may be fallout in other areas, but I see the forefront in technology being steered by the military. On the other hand, service development is likely to be steered by the residential market where volume is great and where many niches can exist.

Question: How will partnerships and collaboration play a role in developing and delivering IoT devices?

Saracco: There are going to be companies that will provide what is the seed of the ecosystem. iTunes is like a seed and everybody is building applications, for example. In IoT, you’re going to have platform owners and ecosystem creators that will be big companies. They will manage aspects like authorization, security, ownership and so on. And you will have millions of other companies, very small ones becoming part of the ecosystem because that’s the place where they can sell their wares one way or another.

Question: How will telecommunications infrastructures have to adapt to support IoT and these ecosystems?

Saracco: The days where consumers pay for the length of time they talk and for the distance are completely gone. Today, everything is a flat rate, but you still pay for connectivity and for access to the connection. However, this is starting to change too. With abundant free Wi-Fi, revenue models are changing further still for telecom and Internet providers. With IoT, we'll probably see companies charging for the associated service. For example, a fire alarm company won't make money if they only charge you when you use your alarm, so they have to charge a different way; you pay for a continuity of service, as well as reliability and availability, even if you never use the service. It's really a different world with IoT and companies are trying to adjust and invent new business models so they can deliver services and get paid for it. This will vary depending on the type of IoT device.