At the end of 2014 the United Nations released the results of the largest survey ever undertaken in its 70-year history, reaching over seven million people in 88 countries all over the world. The My World survey was one input to three years of negotiations and debate climaxing in September 2015 when 193 countries agreed to a set of 17 development goals and 169 targets to be achieved by 2030. In 2016 the international community is embarking on the implementation of these goals and targets. What’s this all about?

The well-known Millennium Development Goals (MDGs) set by the United Nations back in 2000 consisted of eight anti-poverty targets that the world committed to achieving by 2015. The MDGs were aimed at an array of issues that included actions on poverty, hunger, disease, illiteracy, gender inequality, and access to water and sanitation (Figure 1). 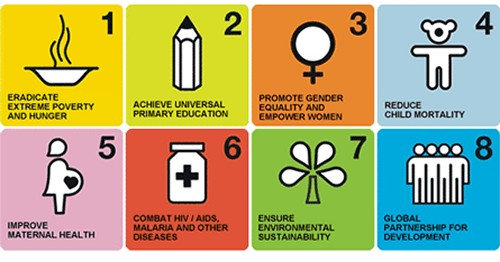 Were the MDGs achieved?

The UN's Millennium Development Goals Report asserts that “The global mobilization behind the Millennium Development Goals has produced the most successful anti-poverty movement in history” noting that the MDGs “helped to lift more than one billion people out of extreme poverty, to make inroads against hunger, to enable more girls to attend school than ever before and to protect our planet.”

But the MDGs have been criticised for being too narrow in focus. Although significant progress was made over the 15 year period the benefits were often confined to specific regions and social groups. A 2015 UN assessment of the MDGs noted: “The assessment of progress towards the MDGs has repeatedly shown that the poorest and those disadvantaged because of gender, age, disability or ethnicity are often bypassed.”

The UN has responded to such criticisms in its 2030 Agenda for Sustainable Development, which includes a set of 17 Sustainable Development Goals (SDGs) to end poverty, fight inequality and injustice, and tackle climate change by 2030. These SDGs, adopted by world leaders in September 2015, build on the MDGs by addressing a wider range of issues, from gender inequality to climate change, with the unifying thread of a commitment to ending poverty.

The SDGs benefitted from an inclusive consultation process. The My World survey gathered data from seven million people focusing on youth and developing countries, asking them to select six out of 16 priorities for a better life. The priorities returned by the survey are shown in Figure 2. 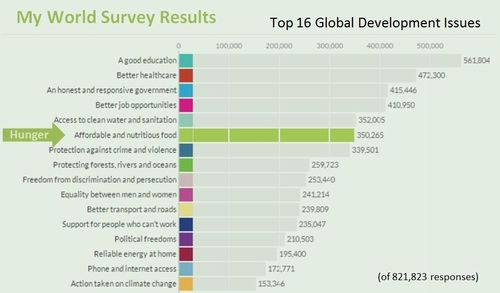 Figure 2: Extract from the My World survey results

This exercise recognised that the MDGs failed certain people and countries. The 2030 Agenda for Sustainable Development deliberately sets out to “reach the furthest behind first” and concludes with a pledge that “no one will be left behind”.

The new SDGs, and the broader sustainability agenda, go much further than the MDGs, addressing the root causes of poverty and the universal need for development that works for all people. The 193 countries that agreed to the 17 SDGs in September 2015 have signed up to a set of development goals more bold and ambitious than anything that has come before them (Figure 3). 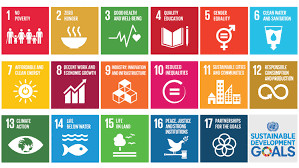 1. No Poverty – End poverty in all its forms everywhere.

3. Good Health and Well-being – Ensure healthy lives and promote well-being for all at all ages.

6. Clean Water and Sanitation – Ensure availability and sustainable management of water and sanitation for all.

7. Affordable and Clean Energy – Ensure access to affordable, reliable, sustainable and clean energy for all.

10. Reduced Inequalities – Reduce inequality within and among countries.

14. Life Below Water – Conserve and sustainably use the oceans, seas and marine resources for sustainable development.

16. Peace, Justice and Strong Institutions – Promote peaceful and inclusive societies for sustainable development, provide access to justice for all and build effective, accountable and inclusive institutions at all levels.

17. Partnerships for the Goals – Strengthen the means of implementation and revitalize the global partnership for sustainable development.

The SDGs and their associated targets are clearly unobtainable without major transformations of business models, the global economy and societies. The hope is that Information and Communication Technologies (ICTs) will provide the necessary innovation to drive such transformations.

Access to clean water is number 5 in the My World survey priority list (Figure 2). Access to phones and the internet is number 15. Few would argue with those priorities. Yet they shouldn’t necessarily be taken literally. Speaking on a panel at ITU Telecom 2012, Jennifer May of McKinsey made an important observation.

“Imagine you are a parent in rural sub-Saharan Africa. Your child is sick. You know it's from drinking water, contaminated water. They've got diarrhoea, and almost a million kids around the world die from this a year. What do you do? Do you keep giving them bad water, or do you stop?” asked May. She continued “They did a survey in parts of rural India where up to 50% of mothers said bad water, stop. Makes sense; right? Unfortunately, this leads directly to a lot of these infants dying. Had they been able to pick up the phone and call a phone doctor, that with a bit of advice on salt, sugar, and what to do with their child, would have saved fundamental lives.”

There is a simple remedy: an Oral Rehydration Salts solution using boiled water, sugar and salt. This life-saving remedy could be prescribed over the phone.

New data from the ITU show that in 2016, over two-thirds of the world’s population lives within an area covered by a mobile broadband network and that ICT services continue to become more affordable.

Jennifer May again: “In most of these places, there are phones. There are mobile phones. And there isn't running water. So build on what you've got.”

The Internet of Things will undoubtedly play a major role in achieving many of the SDGs. But, given the SDGs’ emphasis on the developing world, is the IoT community focusing on applications and services that will prioritise the needs of the neediest and so support the SDGs? Is the community addressing the barriers that need to be overcome to ensure the implementation of the innovative solutions that will be necessary to transform the global economy and societies?

The recipients of this newsletter – the more than 13,000 members of the IEEE IoT Technical Community – are well placed to answer these questions. We welcome your thoughts on how IoT can support specific SDGs and what regulatory and social changes will be necessary to reach these goals.

Stuart Sharrock has been working as an analyst and consultant in the telecommunications industry for the past three decades. He holds a BSc in Natural Philosophy from Edinburgh University and a PhD in Nuclear Physics from University College London and has conducted research in nuclear physics in the Soviet Union, Switzerland, the UK and the USA. He lectured in physics at UCL before entering the commercial world as the Physical Sciences Editor of Nature, the world's leading peer reviewed scientific journal, and subsequently as a publisher of scientific books and journals for a number of major publishing houses before becoming an independent analyst and consultant. Stuart is a member of the IEEE and the Managing Editor of the IEEE IoT eNewsletter.