Space exploration represents a new frontier of human knowledge. Humanity has always tried to overcome its limits: researchers in the field are looking for increasingly advantageous ways to reach far cosmic distances, thus colonizing and learning from new worlds. Specifically, many astronomers define Mars as the "New Earth"; over the years, it was the destination of many missions, mainly searching for life forms. Systems including proper technologies and communication protocols must be put in place to deal with extra-terrestrial exploration.

In such a direction, the Internet of Things (IoT) paradigm introduces innovative technologies in the astronomy field by realizing evolution systems to be applied in future missions. The scope of the presented work is to describe the design process for realizing an IoT-based system, which is targeted at space exploration. Furthermore, it should represent a starting point for further use in extra-terrestrial applications, where scientists need to monitor and analyze planets or satellites' surfaces or atmospheres.

IoT-based systems include various devices, able to acquire heterogeneous kinds of information and interact among themselves to achieve a certain scope. The application scenario, which is hereby analyzed, focuses on constructing a Martian rover, shown in Figure 1 [3], capable of acquiring soil samples and information regarding the planet's atmosphere. A command center monitors the space mission from the Earth and instructs the rover. First, it can move autonomously on the Martian surface with three pairs of wheels; then, it has a camera to record the surrounding environment. 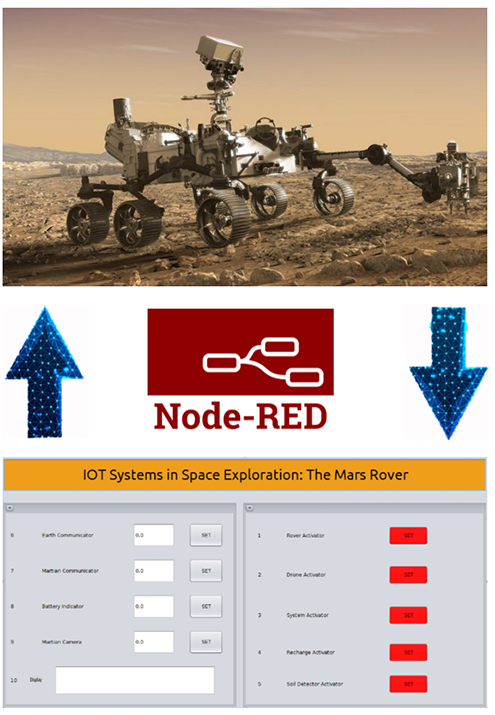 The main components of the system are:

The project design presents some issues in managing communications because all transmitted commands from the Earth have to travel long distances. All communications between Mars and Earth happen through satellites. Due to the distance, a substantial delay is generated [1][2]. As communication signals travel at the speed of light, it can take between 3 and 22 minutes for the information to reach the destination.

The project reproduces what would happen in a real case. The system behavior is simulated with an application (Figure 1 below), which interacts with the Node-Red framework [6]. Node-Red is a software framework acting as a middleware, thus representing the logical side of the system, able to interact with both the data sources and the final recipients. Node-Red allows creating flows to simulate the behavior of the involved IoT devices when the control console (Figure 2) works.

NASA communicates with rovers using the Deep Space Network (DSA): a net of radio telescopes that carry out support activities in the field of radio and radar communication. An antenna sends instructions in the form of radio waves from the Earth Communicator. They are received by Mars Communicator connected to the rover's antenna, which is in charge of routing the correct command to the proper sensor.

Instead, the Martian rover's components mentioned above communicate among each other using the MQTT protocol. It is an asynchronous protocol, which means the messages are published, and the interested devices subscribe themselves to obtain the desired information. Note that all data exchange is encrypted.

Each device has a numeric identifier that the System_Activation Flow (Figure 3) will use to define which device will turn on/off to execute a certain task in response to a certain situation. The system's behavior is managed following accurate rules and data flows to prevent failures and waste of resources. For example, CodeSystemActivationPublisher (Figure 3) will publish the Code1 received from MarsCommListener (Figure 4) that will execute all systems activation procedures. The same reasoning will apply to the other MQTT publishers, which will activate the recharge system (Code2), drone (Code3), soil detector (Code4), and camera (Code5), respectively.

Figure 2: The portion of System_Activation flow for managing the various devices. 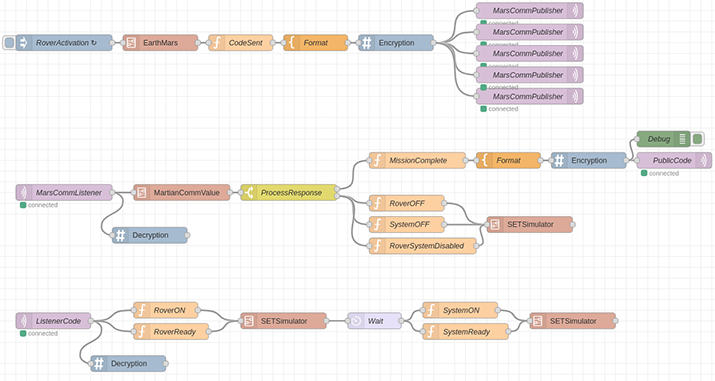 Figure 3: The portion of System_Activation flow to activate system components.

The system will implement other vital functions, such as gathering atmospheric data or soil samples and building graphs (Figure 4). The first operation is permitted by the presence of a drone [4] activated, which can move from the connected rover and fly through Mars's atmosphere. The second one is managed thanks to a mechanical arm [5], drilling the soil to extract samples. Moreover, the rover owns a camera to take pictures, monitor the environment, and avoid obstacles [5]. In the end, Mars's rover is equipped with a recharging system to charge the battery using installed solar panels. 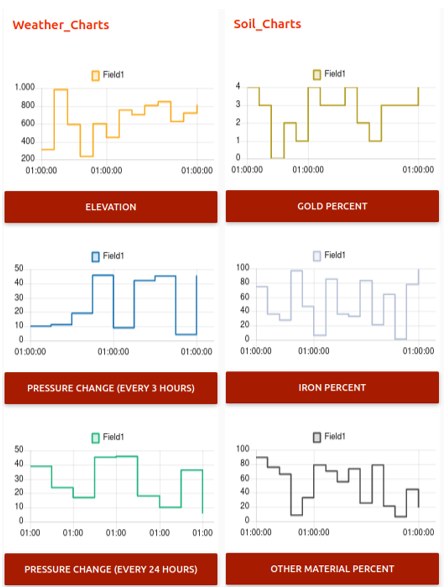 The investigated scenario could represent a starting point for designing solutions in the space exploration and monitoring field. In this sense, the Node-RED tool allows to define the involved entities and sensors and simulate the behavior of both application logic and communication protocol.

The case of the Mars rover is intended as an example of an application for collecting data on extra-terrestrial environments, with atmospheric and surface features like the Earth [7]. Hence, if correctly set up, the envisioned technologies could be adopted in various applications on other planets or satellites. For example, they could help geologists with their studies and exploration of different surfaces [8]. Also, scientists could analyze atmospheric variations and their influence on climatic mutation, compared with the Earth.

Note that some situations could require monitoring a wide area; therefore, a distributed and interoperable system must be implemented [9]. In such a direction, the IoT paradigm perfectly fits the need to manage information from different sources. Therefore, realizing a distributed architecture to handle heterogeneous data in extra-terrestrial environments can be considered an exciting research topic.