Looking for a Compass for Navigating the IoT Platform Landscape

The market landscape of IoT platforms – software middleware for the Internet of Things – is rich in solutions with a continuous flow of new ideas. That is a sign of momentum in the space, but at the same time, an indication of confusion and controversy. Organisations aiming to run their own IoT strategy are facing the challenge of choosing a platform from more than 300 available in the market. The controversy lies in the fact that those platforms offer different combinations of services.

Therefore, the definition of an IoT platform becomes blurry and difficult to grasp. The conclusion is that all IoT market players are not only navigating in beautiful waters, rich in ideas, but also in troubled ones, because there is no clarity on how to interpret those ideas. Beecham Research has explored this space since the M2M era. Currently, the work is focussing on the definition of a benchmarking model that helps the various stakeholders of the IoT community to safely navigate those waters. This article will illustrate this work, which extends from the days of M2M platforms to the development of a compass for the IoT platform landscape.

From M2M SES to IoT platforms – responding to rising complexity

At the beginning of this decade, the number of platforms was limited. M2M Service Enablement Service (SES) Platforms, as defined by Beecham Research in the first study on the topic dated 2010, represented a market segment known only to experts. Despite that, they were the enablers of M2M applications and, for organisations providing M2M SES platforms, the platform delivered a strong element of competitive advantage. As shown in Figure 1, there were 30 platforms in the marketplace, providing 54 different services, mainly about device management and connectivity management capabilities. 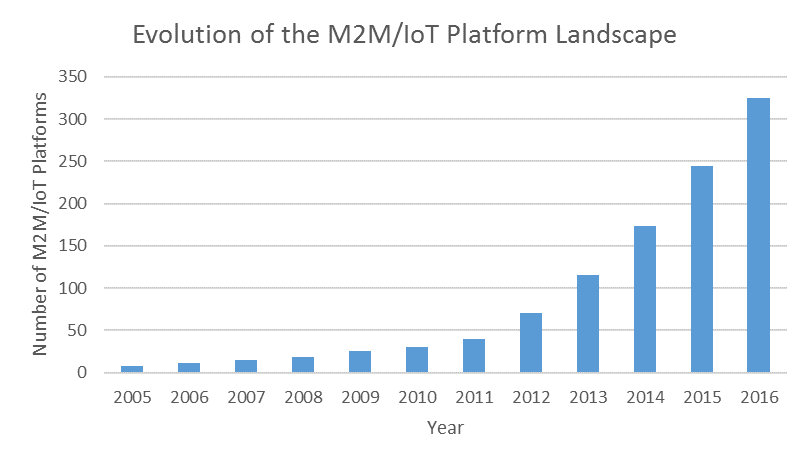 In 2012, the number of platforms rose to more than 60 offering 114 different services. This growth reflected an increasing demand of new services due to the complexity of projects adopters were facing. It was clear that the monetization of M2M projects was not just about connectivity and devices, but services were a strong revenue source. However, moving towards a service-centric approach was not easy. M2M adopters were not ready for such a move and deploying M2M solutions was neither easy nor painless. Possessing M2M solutions was not perceived as a strategic move. And, organisations, which experienced the potential of using machine-generated data, were often running difficult in-house activities. The response of M2M SES platform providers to all this was to move from the idea that the platform should be reinvented for different sectors towards the idea that the platform should be a horizontal layer on which any type of M2M application could be developed. That horizontal layer should have abstracted the application development from the device and the type of connectivity. That vision was possible because M2M applications revolved primarily around monitoring a specific type of device, gathering a specific type of data, using a specific type of connectivity, and running some simple analytics on the data. The M2M SES platform was largely horizontal, able to be used in different applications with very few vertical adaptations. That situation is not easily applicable to the IoT vision.

The context-centric view of the Internet of Things 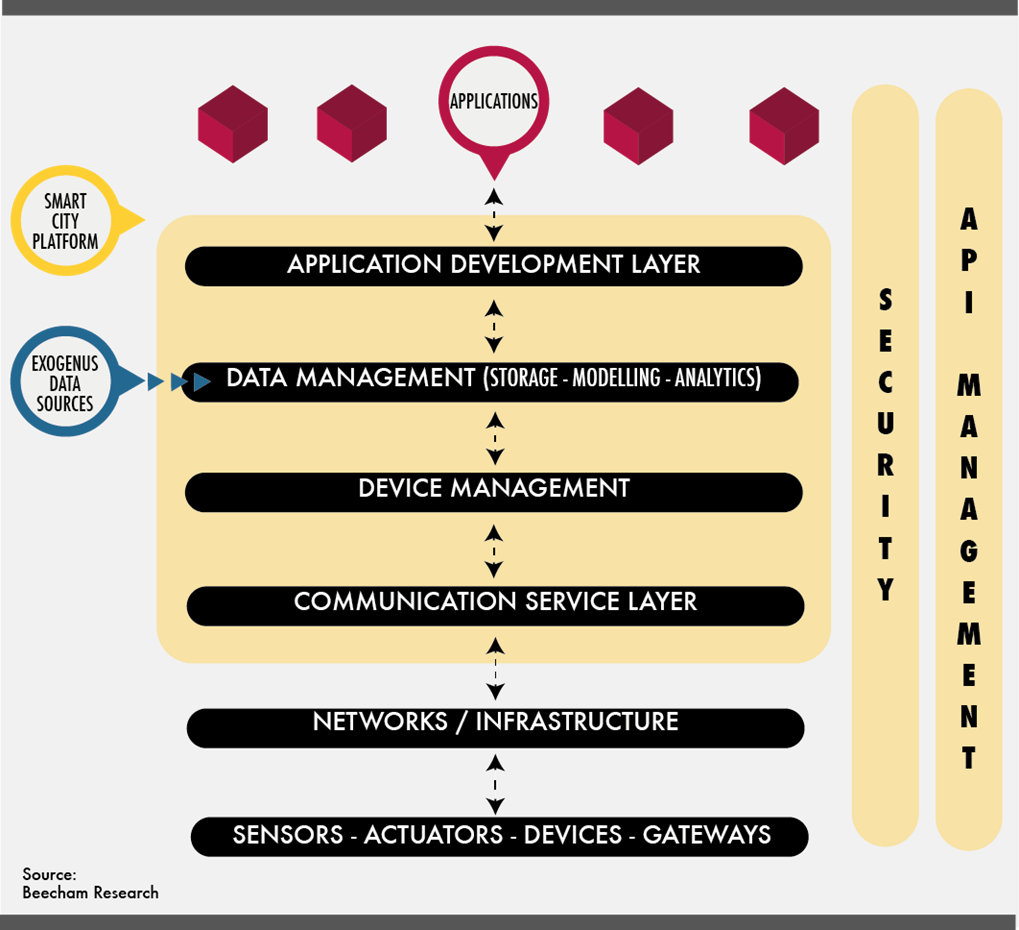 Using Figure 2 as a reference architecture, we can then assess IoT platforms in the marketplace based on two sets of indicators. The first set looks at the technological aspects.

The second set of indicators looks at the business aspects:

The next step is to define a rating scale for each of these indicators. The rate should give an insight on the relevancy of each criterion for the IoT platform under scrutiny. The analysis of the ratings should then enable the selection of potential candidates which warrant further investigation.

Beecham Research has run a first test of the compass on a limited number of platforms selected for their market relevancy. The compass has enabled the researcher to group IoT platforms and running the comparison within the groups has produced good results in terms of output and usability.

The move from M2M applications towards the context and situational-centric view of the Internet of Things has brought business opportunities and a proliferation of ideas, but also complexity. The IoT platform is the essential middleware layer that enables that richness and governs that intricacy. The IoT community has responded with a tremendous flow of ideas creating a rich landscape of offers. That abundance has also brought difficulties in selecting an appropriate platform for specific business purposes. Therefore, a benchmarking framework that enables companies to screen the offers and select potential candidates is necessary. This paper has proposed an approach for that framework. That approach is not the final answer, but is a step towards a more informed assessment of IoT platforms and a tool to make the IoT platform landscape less cloudy to all stakeholders.

Cavalcante, E. et al. 2015. An Analysis of Reference Architectures for the Internet of Things. ACM

Saverio Romeo is a Principal Analyst at Beecham Research. He runs research in the areas of M2M, Internet of Things, and wearable technologies and has published in areas such as mobile healthcare, smart cities, smart utility, data analytics, smart farming, M2M/IoT connectivity, and M2M/IoT platforms. On these subjects, Saverio has also advised organisations such as Vodafone Group, Sierra Wireless, Telit International, Sony, Inmarsat, Wireless Logic and GSMA.

Previously, Saverio worked as an M2M/mobile analyst at Frost & Sullivan, telecommunications policy analyst at Technopolis Group and European Commission and as a software developer. Saverio is also a Visiting Fellow at the Centre for Innovation Management Research at Birkbeck. His research revolves around entrepreneurship in high-tech sectors and IoT policy. He has published five academic journal articles, six book chapters, and 11 conference papers.

Saverio holds three Master Degrees, one in Telecommunications Engineering (University of Naples “Federico II”), one in Information Technologies (“Politecnico di Milano” University – CEFRIEL) and one in Innovation Management and Technology Policy (Birkbeck, University of London). He speaks fluent English; he is native Italian and is intermediate in Modern Greek.