Many industries, such as banking, retail and entertainment have recently transformed into real time services, being globally accessible around the clock. Money transfer takes less than a second, and your favorite movie plays in two while you're commuting. Now, with IoT, this transformation will also happen, probably even faster, in the physical world. Everything can be converted into continuously evolving services. It is mostly our traditions and habits that are in the way.

IoT is all around you

We already have permanently connected and data-producing cars, harbor cranes, chainsaws, toothbrushes, marine engines and a number of other big and small things, which are mostly tracked and controlled by an evolutionary program in a distributed cloud architecture. We've decided to call this program Spime, after Bruce Sterling's perfect neologism for the cyber side of any cyber-physical system.

Connecting us, people, to the cloud is taking baby steps, with lifestyle and fitness devices and safety systems for elderly people for example. However, since the human brain and the autonomous nervous system are extremely complex computing and actuation arrays themselves, the bar is quite high to get really started. The analytics side, or lab tests in medicine terms, is progressing fast though, along with genetics. We're studying the human operating system from many angles, but not interacting with it that much, just yet.

The reactive and coarse nature of current medical best practices is evident for example in treating high blood pressure, a condition affecting millions of people worldwide. It is usually detected in a regular health check, based on 2-3 ad-hoc measurements by the doctor. If the values are high, the doctor has an arsenal of very different medications, including beta blockers, ACE inhibitors, calcium blockers and so on. She selects one based on her own experience, and the patient tries it for a week or two. When the patient comes back, there's another set of measurements and an assessment of any side effects. In most cases, one medicine is not enough, so the doctor tries different permutations and dosages, many times iterating for over a year, until the (average) pressure is permanently lowered and the side effects are, well, bearable. 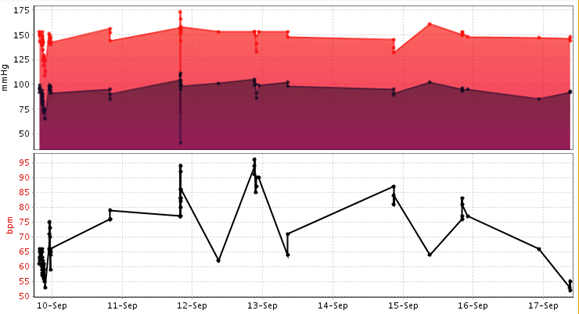 Let's take a technical perspective into this blood pressure process. High blood pressure is dangerous due to extra load on the circulatory system, making it prone to faults like vein ruptures and organ malfunctions. However, it is not really the average pressure causing life-threatening conditions, but a failure of the autonomous nervous system to maintain safe levels in different circumstances. Instead of 2-3 systole, diastole and pulse measurements, we'd need longer term amplitude analysis, before and after different medications. Each human has an individual response to these medications, and effective dosages have great variance.

With existing sensors, communication capabilities and distributed cloud platforms, we can already build a human spime with necessary physical sensors and actuators to treat conditions like high blood pressure in real time. Starting with a home-based 3D medicine printer and various wireless sensors, correct dosages and medicine ingredients could be iterated to perfection during the first hour of treatment, instead of the traditional year. All sensors and actuators just have to be seamlessly connected to the same platform. Needless to say, this platform must be highly reliable and secure.

Eventually these sensors and actuators, being continuously managed by their spimes, will find themselves embedded under the skin, or even within human organs. 3D printing, even with medicines, is now mostly understandable, but the same principle can be applied in creating biological factories within the human body, in order to produce medications or retain and extract required hormones. Those factories need a program, and that needs connectivity and computing, both local and off-human. This may sound scary and unnatural, but technically it is just a new, faster way of interacting with our biology.

Although great advances can be achieved with precision medicine using spimes, the accumulated, real time data from millions of people will have even more profound consequences to basic medical research and understanding of the human operating system. New medicines can be tested more and more virtually when body processes can be emulated using real data.

Talking about a unified platform in cyber-physical systems may paint a slightly misleading picture, as it is more of a philosophy than a bunch of computers in a data center run by the platform owner. With IoT, especially in medical applications, a lot of ad-hoc edge computing and analysis is needed. Furthermore, the structure must be adaptive so that computing happens in the most optimal place in a continuously changing environment, meaning that the spime is always on the move. Architecture must be evolutionary, just like we are.

While we've seen huge medical advances with Magnetic Resonance Imaging (MRI), engineered viruses delivering deadly blows to cancer cells and cortical/cochlear implants restoring hearing, we believe that IoT, spimes and related platforms will turbocharge this development. We will finally get to know our human operating system and learn how to code against its APIs. Planned and engineered securely, it may have the greatest impact to human happiness this far.

Pasi Hurri is the President & Chief Executive Officer of BaseN Corporation, global IoT operator. In addition to his role at BaseN, he holds board level positions at AmCham Finland and at a number of technology companies.

Prior to founding BaseN in 2001, he spent more than a decade in senior technology management positions. He presided over the engineering effort of the KPNQwest Eurorings network, then the largest pan-European carrier transporting more than 50% of the internet traffic. Mr. Hurri also was the Chairman of FICIX, the Finnish Commercial Internet Exchange, and a Member of the Board of Directors at Academica Oy, now part of TelecityGroup. Within Ahlstrom Corporation he managed the creation of a global IP network in the early 90s.

With his strategic thinking inherited from the Finnish Air Force, Mr. Hurri has always emphasized the importance of deep situational awareness, according to Clausewitz principles. He is also a visiting lecturer and expert speaker at IEEE and several universities. pasi.hurri@basen.net