The Internet of Things (IoT) promises a world where all things are interconnected. Some call IoT, the Internet of Everything as it creates a vision of an unprecedented era of connectedness. Advances in networking and computing technologies will be one aspect to enabling IoT, in addition to social acceptance and successful business models. Several of the computing technologies and approaches being explored by the new IEEE Initiative on Rebooting Computing (RC) to address limitations in computational efficiency and performance, may also help in the development and maturation of the IoT.

IoT has been called the most disruptive technological revolution since the advent of the internet. The internet has been on a steady path of development and improvement, but IoT is its first real evolution that will drastically change the way people live, learn, work, and entertain themselves. One projection suggests that IoT will have over 50 billion humans and objects, or nodes, interconnected by 2020. Another projection suggests 1 trillion connected devices by 2025. A plethora of data can be gathered from multiple devices and applications connected to an always-on network, and then fused and analyzed in real time. IoT may increase the efficiency of a production line, provide 24´7 monitoring of a patient, enable data collection for long-term research, and provide a whole host of new services for consumers. IoT is transforming many industries, including transportation, healthcare and manufacturing with connected cars, connected homes, wearables, and industrial internet. There are many technical challenges related to implementing a connected sensorized world.

From a networking perspective, there must be measurable service quality with guaranteed connectivity for a large number of mobile objects. An always-on network with a global footprint will require a balance of core communications systems with flexible infrastructure components that can keep a network robust and resilient. However, IoT is a network of networks and any weak link can impact its services greatly. Standardization in hardware and software among users and manufacturers would help in the management of this large heterogeneous network, but reaching consensus amongst a group of competitors will not be easy.

From a computing perspective, each of the IoT-connected devices, including the embedded sensors and processors, must be extremely miniaturized, energy efficient, and consume minimum power. These connected devices will capture data and generate data, producing oceans of data that will require a "brain" to analyze and transform the data into useful information. Pockets of personal data repositories everywhere will bring on the important issues of privacy and security. Identity management, access control, and data protection must be ubiquitous to ensure sensitive private and personal data do not fall into the wrong hands. Preventing hacking into the IoT connected devices will be a challenge when there are so many potential points of intrusion.

The human-to-computer interfaces also need to evolve to make the interactions less complex and truly natural. The ability to capture speech, touch, and gestures would enable users to interact with computing devices just as naturally as they interact with each other. Natural language translation and processing within the user’s context would further improve the user’s experience.

IEEE Rebooting Computing (RC) is an initiative launched in 2012 by the IEEE Future Directions Committee to rethink the computer from "soup to nuts" including all aspects from device to user interface. Information can be found on the RC portal http://rebootingcomputing.ieee.org/.

Why the need to rethink the computer now? Because there is a general consensus that the primary technology driver for almost five decades, Moore’s Law for scaling of integrated circuits, is finally ending. Performance had been increasing exponentially every 18 months with the number of transistors on a chip doubling, drastically decreasing the size of typical computing devices. However, Complementary Metal-Oxide Semiconductor (CMOS) technology appears to be reaching physical limits, including size and power density, and there is presently no technology available that can take its place.

The RC Initiative takes a holistic view that addresses all aspects of computing, from design, function, performance, and energy efficiency, starting from a clean slate. It is an inter-society effort consisting of representatives and volunteers from nine IEEE Societies and Councils as well as other organizations involved in future trends in computer technology, such as the International Technology Roadmap for Semiconductors (ITRS).

Path to Internet of Things

Several of the concepts discussed within the RC Initiative have potential application to the development of an IoT environment. The three pillars of computing, which are Energy Efficiency, Human-Computer Interface (HCI), and Security are also important foundations in the IoT. 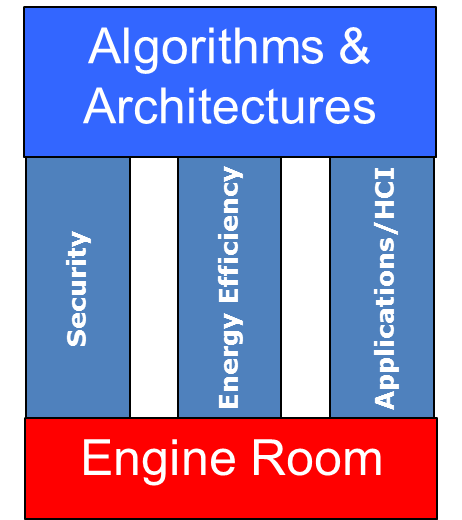 The three pillars of computing

Each of the IoT-connected devices must be energy efficient and energy aware. The concept of the edge mobile devices harvesting energy from an intermediate edge infrastructure could be an architectural implementation design to be considered for IoT. Similarly, the oceans of data that need to be processed could be off-loaded to the core of large and powerful datacenters with advanced computing and processing to further minimize power consumption of the edge devices so that energy harvesting is sufficient. At the same time, energy efficiency in the core or grid still needs to be addressed or it might become a major cost of operation. "Orthogonal Scaling" and adiabatic computing with massive parallelism might help drive power reduction in the circuits in devices and systems not only in the core/grid but throughout the IoT environment.

Applying the concept of dynamic and unsupervised machine learning in neuromorphic computing to the HCI and applications will most likely provide a better user-to-computer experience for the IoT edge device users. Some IoT applications can leverage approximate computing when an accurate answer is not necessary but a sufficiently good answer is enough to minimize energy consumption from user and network devices. Neuromorphic computing approaches offer great promises for efficiently analyzing large amounts of unstructured information under the dynamic conditions that IoT demands. Circuit designs for the devices and systems in the IoT can leverage the approach of augmenting CMOS to enhance performance through orthogonal scaling of memory storage and processing power.

Security is an important aspect in IoT as it may be the biggest system that mankind has ever built. With billions and perhaps trillions of nodes, security against unauthorized access or control must be distributed throughout the system. No centralized master protection system would be effective. Establishing forward-looking security standards and practices will help establish and implement a universal secured and trusted network of systems and devices. Each node must contain its own standardized security module that can automatically be updated with the latest protection algorithm. Furthermore, privacy must be maintained, which requires adequate encryption of data signals, as well as proper verification of authorized users.

Further R&D is needed for many of these promising technologies and approaches, but their potential benefits in performance, power consumption, security, and human interaction are promising. At the same time, broader collaboration and partnership with organizations such as ITRS and the Brain Research through Advancing Innovative Neurotechnologies (BRAIN) Initiative may help bring new ideas to the forefront to promote future computing technologies.

Despite the apparent saturation of traditional Moore’s Law device scaling, it seems clear that the exponential growth in numbers of devices connected to the internet will continue for the foreseeable future. This is the vision of the Internet of Things (IoT), with seamless integration among edge devices, communication platforms, and high-performance computing engines. For these to work effectively, edge devices must be low-power or no-power (energy harvesting), while data centers must operate efficiently. The networks must operate autonomously, without centralized control or constant human monitoring. Furthermore, the networks must maintain security and foster trust. Finally, the IoT must be configured and programmed so as to improve the quality of life (health, information, education, entertainment, transportation, employment) for all citizens.

We believe that the work done in the IEEE Rebooting Computing Initiative will contribute to the materialization of an effective, energy-efficient and secure IoT. We encourage those interested in IoT and others in the IEEE community to visit the RC Web Portal (http://rebootingcomputing.ieee.org/) and join us in this endeavor.

Bichlien Hoang is a Senior Program Director, IEEE Future Directions. She managed the Life Sciences Initiative from 2011 to 2014, and is currently the Program Manager for the IEEE Rebooting Computing initiative. Prior to joining the IEEE staff in 2004, Bichlien spent 24 years in the telecommunications industry, at Bell Labs, Bellcore and Telcordia where her latest position was Vice-President, Network Engineering. Bichlien is an IEEE Senior Member.

Sin-Kuen Hawkins is currently supporting the IEEE Life Sciences Technical Community and the Rebooting Computing Initiative within Technical Activities of IEEE. Prior to joining the IEEE staff in 2012, Sin-Kuen served as a technical consultant to Army and DARPA programs. She also has 19 years of experience in the telecommunications industry, at Bellcore and Telcordia Technologies, where her last position was Director in Network Engineering and Design. Sin-Kuen is an IEEE member.

Alan M. Kadin is a Technical Consultant based in Princeton Junction, NJ. Earlier, he was a Senior Researcher at Hypres, Inc. of Elmsford, NY, focusing on superconducting circuits, and an Associate Professor of Electrical and Computer Engineering at the University of Rochester in Rochester, NY. He holds a PhD in Applied Physics from Harvard University. He is an IEEE Senior Member and is actively involved in the IEEE Rebooting Computing Initiative.