But the lack of convergent access results in overprovisioning of network infrastructure and the need to deal with multiple network management utilities while convergent access inherently increases the capacity and availability of the network. We have previously introduced our edge-based virtualized gateway architecture, VGATE [1, 2], for providing convergent access for multiple wireless access technologies. In this article, we refine our earlier design to increase scalability and enable the integration of multiple multi-access gateways.

Smart cities and smart industries need to integrate IoT devices over geographically large areas, with a variety of wireless access technologies. From a networking point of view, we would need to manage multiple heterogeneous networks across hundreds of gateways. This diversity and scale make it difficult to develop tightly integrated services. To alleviate this issue, we need unified data and control flows for distributing and managing services.

We present an architecture based on VGATE that integrates control and data flow across multiple wireless access technologies. Furthermore, we address the problem of the dominant resource consumer, usually the physical layer (PHY) that dictates demand-based scaling decisions. We redesign the network stack as a set of loosely-coupled microservices instead of a single monolithic stack. This opens up opportunities for integration between gateways and wireless access technologies at multiple layers.

Figure 1 shows a logical view of our refined architecture. We have a three-layer design of cloud, edge, and gateway.  The cloud runs the IoT applications that perform data processing and generate service-level control policies for the management of the network. In Figure 1, we show a building monitoring application as an example IoT application. It monitors the power and water usage through the light (blue) and water (green) IoT sensors. Next, we have the geo-distributed edge which hosts the different components of the network stack for the gateway. Finally, we have the gateway, a flexible software radio responsible for maintaining radio connections to and from the IoT devices. The network stack consists of three main microservices: Transport, Network, and PHY+DataLink performing their corresponding functionality as in the network stack. This microservices-based architecture allows us to integrate at mainly two levels: network-level integration and transport-level integration. 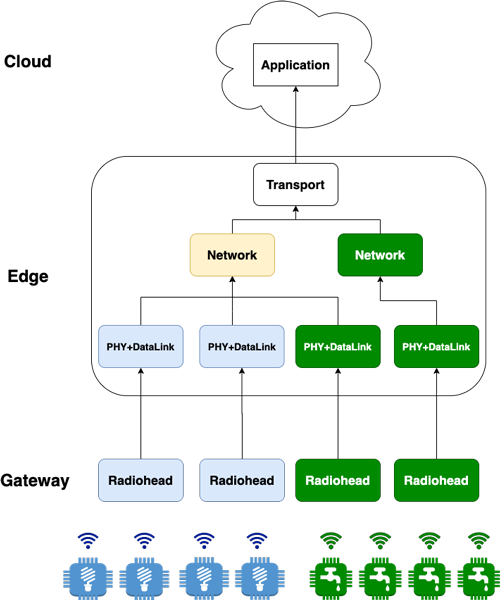 Traditional devices across multiple gateways and wireless access technologies are considered to be part of different networks. This view of a network of networks limits the scope of network-level optimization to local networks only. With network-level integration, devices of multiple wireless technologies across multiple gateways can be logically integrated into a single network. This provides an overall view of all the devices allowing for more flexible network-level optimization such as load-balancing across multiple gateways and wireless access technologies. For example, if a device is reachable across multiple gateways or multiple access technologies, then having the global view helps to rearrange the network dynamically to select the link that maximizes the quality of service. Similarly, for closed-loop control systems, the interaction of heterogeneous devices in the same network facilitates the design of device-to-device data flow. This kind of flow reduces feedback loop delay as the data does not need to be propagated to the cloud-based IoT application. One major limitation is that the addressing, routing, and security methods used in network layers across different wireless access technologies, such as LoRa, Bluetooth Low Energy (BLE), IEEE 802.15.4 are different. However, there have already been major strides towards the adoption of IPv6 and RPL as the standard addressing and routing method in LoRa [3], BLE [4], and IEEE 802.15.4 [5]. Such efforts make this type of integration much more feasible.

The approach of resource scaling on the entire stack typically leads to over-provisioning of resources because of the differences in the traffic load processed by each layer.

The dominant resource consumer would dictate the scaling decision-making. Our microservice-based design allows us to implement demand-based scaling per layer. Instances supporting different requirements for each layer can be used instead of instantiating the whole network stack. For example, if the service changes the requirement for the network layer, we can create a new network layer instance while still using the previous instances of the other layers.

Services can easily be defined as a chain of microservices with requirements specified for each layer. This enables service developers to update parts of the network that are useful to them, while still maintaining compatibility with the other layers. Hence, our approach reduces the development and deployment time of the services.

We are currently implementing this framework for integration across multi gateways and exploring the design of the orchestrator for management of this framework in the context of the EU H2020 project 5G-DIVE.

Saptarshi Hazra is currently working as a researcher at RISE, Sweden. His current research focuses on the development of flexible and scalable platforms for the Internet of Things networks.  He received Masters in Embedded Systems from TU Berlin and KTH Royal Institute of Technology in 2018.

Thiemo Voigt received a Ph.D. degree from Uppsala University, Sweden, in 2002. He is a Professor of computer science at the Department of Information Technology, Uppsala University. He also leads the Networked Embedded Systems group at RISE Computer Science. His current research focuses on system software for embedded networked devices and the Internet of Things. He is the author or co-author of more than 190 reviewed publications and his work has been cited more than 16200 times and received awards at multiple conferences.

Chenguang Lu received an M.Sc. degree in digital communication and a Ph.D. degree in wireless communication from the Chalmers University of Technology, Sweden, in 2005, and Aalborg University, Denmark, in 2008. He is currently a Master Researcher at Ericsson Research, Sweden. His current research focuses on efficient fronthaul interface design for 5G and 6G. He has co-authored over 30 publications in peer-reviewed conferences and journals and has filed over 70 patent applications.