Towards a Digital Single Market for Smarter Cities

Over the last decade, the importance of making urban data openly available for city innovation has increased significantly. Many cities are starting to invest in appropriate data infrastructures to make urban data more widely available for internal use and more accessible to third parties.

Initial attempts of such open data initiatives have focused on static data sets and GIS information that come from internal city council databases and planning departments and have led to the emergence of open data stores in a variety of cities. By opening up real-time data from closed vertical legacy systems such as energy and transportation or the deployment of new IoT infrastructures in cities, a richer set of data can be made available for services that can react to real-world events and drive new efficiencies of public service delivery and/or improve significantly the user experience.

Digital front runner cities such as Barcelona, Singapore and Amsterdam have worked closely with larger vendors such as CISCO or IBM to establish integrated IoT data platforms. These platforms solve the data integration problem and allow to harmonise access to IoT data across different verticals making IoT data accessible to third parties via APIs. However, the market now offers nearly 500 different IoT platforms[1] from different vendors, many of these also applicable to cities.

The lack of commonly agreed and adopted smart city standards across vendors makes it difficult to build vendor agnostic solutions which lead to city vendor lock-in and make it more difficult for third party infrastructure and service providers to develop solutions that scale.

Scaling city platforms without vendor lock-in: the lack of usable standards and an interoperable vendor ecosystem for IoT-enabled smart city solutions makes it difficult for cities to commit to a specific solution, without creating significant dependencies on a single vendor. There is a latent fear of vendor lock-in that can affect further procurement choices for expansions and scaling of the underlying infrastructure, without significant system integration expenses. As a result, cities are often reluctant to make larger investment in smart infrastructure hampering the market uptake of these.

Increasing portability of IoT-enabled city services across city environments – avoiding city lock-in: current APIs for accessing streamed data from IoT infrastructures and other sources can vary greatly across cities, and so can the availability of specific data sources and underlying data formats. This makes it very challenging for many developers and providers of IoT-based smart city services to deploy and operate a service that has been initially developed for one city environment to another, significantly limiting the opportunities that come from economies of scale. We call this fear of “city lock-in”.

Encouraging new IoT infrastructure investments and sharing of closed data in cities: proprietary IoT infrastructures and their tight coupling to specific services and IoT platforms makes it difficult to support IoT infrastructure reuse and achieve necessary economies of scale. The resulting siloed business models, e.g. one IoT deployment for one specific app, make it harder to achieve a viable return of investments.  In addition to IoT infrastructure, other companies and organisations such as telecom operators, utility companies or insurance firms hold a rich set of data sources that can augment existing open data sources to fuel further innovation and provide the basis to solve more complex challenges.

Finding secondary exploitations for IoT deployments and currently closed data sets would enable new business models and bring down the barrier for investment. However, licensing models for sharing such data are not yet properly understood and developed. Future-proof market mechanisms are needed that provide adequate trust and incentives, in order to extend the commercial viability of open data beyond traditional licencing models.

Moving from proprietary smart city platforms to a scalable digital single market requires fostering consensus on a common reference architecture with common interfaces and information models. For the past years the supply side has been either focused on proprietary solutions or tried to battle it out as part of competing standards-based vendor ecosystem. The lack of progress on consensus has frustrated many cities and seriously slowed down further smart city investments.

Motivated by this market failure, a variety of cities in Europe have formed the Open & Agile Smart Cities (OASC) initiatives, which has now grown into an international smart city network that has the goal of creating and shaping the nascent global smart city data and services market. After a phase of rapid growth, OASC now connects 124 smart cities globally organised in national networks from 25 countries and regions. Its main goal is to establish the Minimal Interoperability Mechanisms (MIMs) needed to create a smart city market. MIMs are simple and transparent mechanisms, ready to use in any city, regardless of size or capacity. By implementing MIMs, cities increase the speed and openness of innovation and development, whilst decreasing cost and inefficiency. In essence, MIMs allow cities to engage in global digital transformation.

Several pioneering OASC cities have joined forces with vendors under the umbrella of the SynchroniCity project[2] to propose a common reference architecture (see figure 1) including MIMs (highlighted in red) and pilot these in practice at scale. 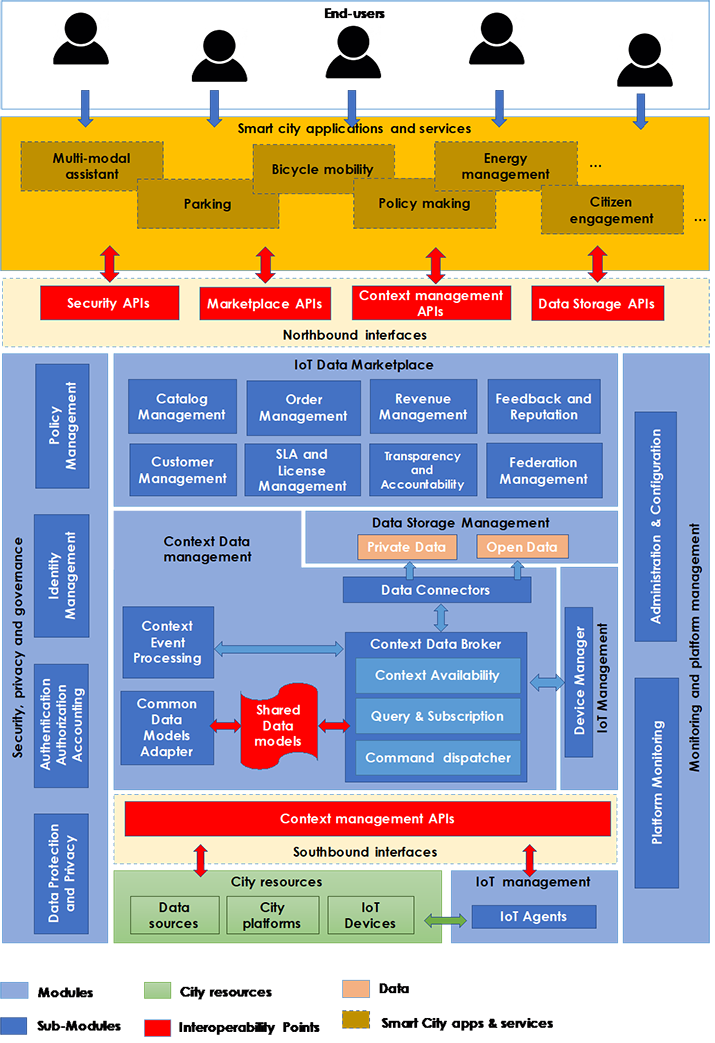 In practice, the OASC MIMs are a set of common APIs to access data, context information to structure data. In addition, a reference architecture and a reference implementation complete the set of MIMs. OASC Council of Cities officially adopted the first three MIMs in January 2019, which are shown in the Table 1.

From Common Platforms to Common Marketplaces

Beyond harmonisation of access to IoT data sources, we have developed an IoT data marketplace as a new enabler to foster a trusted data ecosystem in cities, based on the MIM for transaction ecosystem management. The data marketplace acts as a one-stop-shop for city-generated data and offers opportunities for generating value to all parties in the smart city ecosystem. Data providers (i.e. organisations/municipalities that own IoT devices or data sets) can expose their data assets in the marketplace and generating revenue from trading them; data consumers (i.e. service providers that build data-driven applications) can browse the data catalogues in the marketplace and purchase data to build their applications; citizens and municipalities can eventually benefit from a huge range of innovative smart city services.

Existing IoT data marketplaces lack of tools to define data licence agreements and service level agreements (SLAs). Businesses need a clear basis to exploit data and create new digital services on top of it. Open data is good, but end users need confidence that data will be available and regularly updated, that the provider will not pull out of the agreement all of a sudden. To this end, our IoT data marketplace provides tools to define both standard open data licences and custom data licences as well as SLAs.

Furthermore, a security layer to control access to data complements the platform along with a trust layer. The latter allows for storing and tracking the agreements on a blockchain network to create audit trails to settle potential disputes which may arise between data providers and data consumers. The service helps build trust among the marketplace users and fosters a fair behavior in adherence to data licence agreements and SLAs.

The Figure 2 illustrates the high-level conceptual diagram of the IoT data marketplace, highlighting the main functionality of its main components. The core platform (marketplace API and portal) is based on the FIWARE / TM Forum Business API Ecosystem and is currently operational in Manchester (UK) and Santander (Spain), with deployment imminent in other SynchroniCity partner cities. 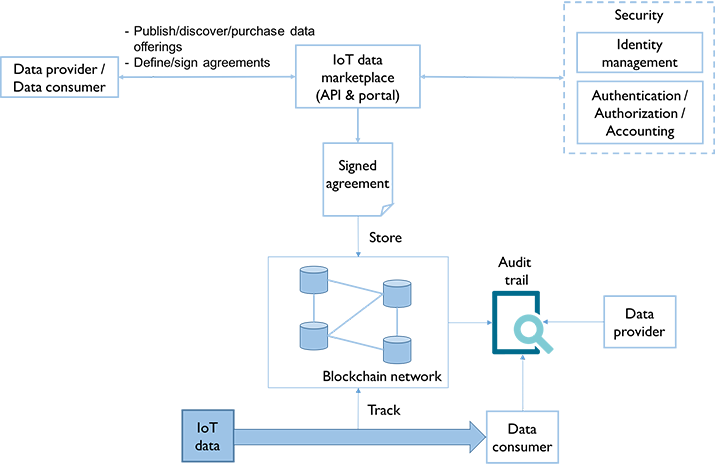 After more than a decade of Smart City experimentation, cities have finally realised that proprietary urban data platforms of existing vendors fail to provide sufficient opportunities for a rich ecosystem of smart city solution providers to emerge. A scalable market requires consensus on common interfaces, APIs and data models so that economies of scale can be quickly achieved. This year, 20 cities across Europe and other parts of the world have embarked on a journey to pilot what we believe could form the foundations of a future digital single market for IoT enabled smart city services. Now is the time to join in order to make this vision become a reality.

Alex Gluhak is Head of Technology (IoT) at the Digital Catapult, where he is responsible for interventions to help UK companies grow faster using emerging digital technologies. For more than 15 years Alex has actively contributed to the research of mobile computing and IoT technologies and how they can be applied to problems in the energy, water and smart city domain. He has worked for companies such as Intel Labs and Ericsson and has published more than 80 peer-reviewed papers at International conferences and journals about his work.

Andrea Gaglione is a Senior Technologist at Digital Catapult where he is responsible for initiating and developing innovation projects in the area of the Internet of Things (IoT). He has over 10 years’ experience in academia and industry, building sensor networks, cyber-physical systems, and IoT infrastructures. His current work focuses on fostering and driving business adoption of IoT and low-power wide-area networks, and establishing digital marketplaces for IoT-enabled smart cities.

Perhaps it was not your intention, but nowhere is the question of data ownership addressed nor whether there is place for the citizen to exercise GDPR rights regarding authorised public use of private data - a follow-on article would be appropriate.