The concept of cloud is to centralize computing, storage and network management, due to the massive resources available. It provides elastic computation power and storage to support request of end user devices for resources. However, recently, a new movement in computation is proceeding with the task of clouds being gradually tending towards the network edges.

Fog networking is a promising approach to cope with the ever-increasing computational demands requested from ever-growing internet-connected devices. Fog computing attempts to provide the cloud capabilities as close as possible to the things that make and perform on the information created in the field. In another word, all the required processing does not need to send back-end to the clouds and portion of the workloads will handle on the fog as near-edge nodes between front-edge devices in the field and the back-end cloud servers.

Dynamic systems as edge devices can be controlled by the computing power and storage space distributed at the network edges. However, limitation in computational recourses at edge servers caused to cloud controllers still being involved and support the extensive dynamic systems control data analysis. Latency is the critical issue for communication of controller at edge and cloud servers. Therefore, control of dynamic systems at edge needs to design edge-controller to pursue fusion strategy from both disciplines of computing network and wireless communications, as shown in Figure 1. 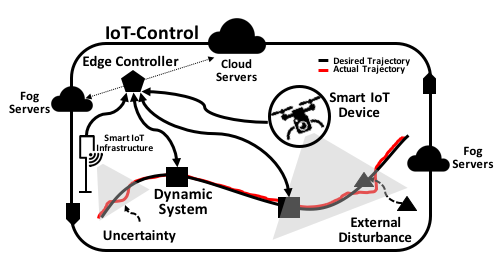 Figure 1: IoT-Control at Edge and Cloud

In dynamic systems, information from Internet of Things (IoT) across multiple smart sensors is collected for decision-making and control. Control at cloud has inherent challenge in real-time situation due to latency caused by congestion. Latency is one of the important problem for stability in control. Moreover, internet suddenly makes large latency and delays with stable remote control of the dynamic systems. Edge control servers perform data processing from the dynamic systems in extremely low latency in mobile fog computing, however computational nodes at edge are limited in compare with cloud control servers and they should have accurate interaction in explicit time. The controller at edge can provide the stability of the dynamic system against the network fluctuations and the internal control signals automatically switch between edge and cloud to prevent instability. The cloud controller supports extensive range of dynamic system control data and using large number of computational resources. The IoT-control systems need an appropriated network architecture to handle end-to-end delay in autonomous systems at edge by providing access network structure and internet for fast communication of various devices from edge to cloud servers.

Benefits of IoT-Control
IoT-Control provides several benefits in handling of dynamic systems when it is collaborating with traditional controllers. Smart IoT devices include of sensors and infrastructures could determine local information aside of dynamic systems and accordingly predict the behavior of objects and situation. There are many external disturbances appear in trajectory of a dynamic systems that affect the performance of the traditional controller designed for this situations. Robust and adaptive control strategies have solutions for this issue however, due to complexity in behavior of disturbances and uncertainties the performance of a dynamic system might be failed even in the presence of accurate robust and adaptive controllers. Therefore, edge-controllers supported with advanced data analytics algorithms and cloud-fog computational environment could help dynamic systems to understand their own local information and provide appropriated control command to get rid of disturbances, as shown in Figure 2. 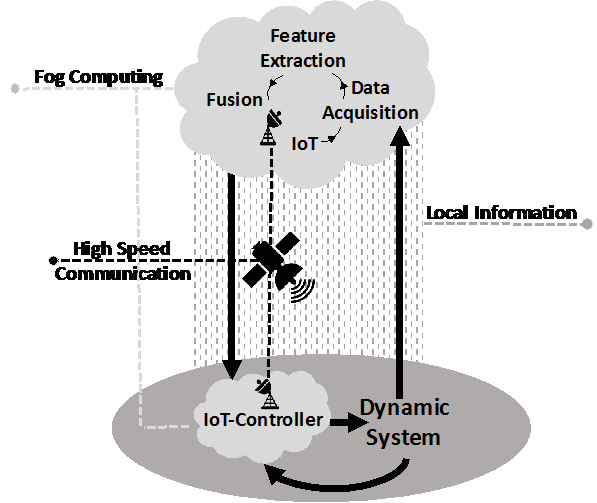 Feedback control strategy provides the information of update situation of dynamic systems. This control methodology will understand how establish a command signal based on information assigned for desired trajectories. In most situation behavior of the disturbances is so fast and the feedback signals released from states of dynamic system could not understand and recognize their behavior. Therefore, the dynamic system responses in wrong direction and inaccurate time. Cloud-Fog machine learning understand the object and situation around dynamic systems using deep feature extraction of local information. Multi source of information, analysis, match and fuse at cloud and fog servers and the results send to the controller. The IoT-controller attempts to combine the traditional signals with the resulted from cloud-fog machine learning. The introduced IoT-Controller has the ability to predict the environment and aware the dynamic system to send compatible control signal to tackle fast and complicated behavioral of external disturbances.

The IoT-Control structure depicted in Figure 3 shows different layers that should be designed to control of dynamic systems at edge. The feature extraction layer consists of an advanced machine learning platform with huge number of trained models on different kind of signals to discover the hidden features existed in the states of the system and those captured form IoT devices.

IoT-Control Application
Autonomous cars are complex dynamic systems which needs IoT-Control. They should have smart environment using vehicle-to-vehicle and vehicle-to-infrastructure communication. In this process, local information of under-control vehicle is collected and sent to machine learning cloud-fog to extract deep features of the environment. Then, IoT-Control makes decision based on the traditional control signals and the analyzed information received from cloud fog machine learning, as shown in Figure 4. 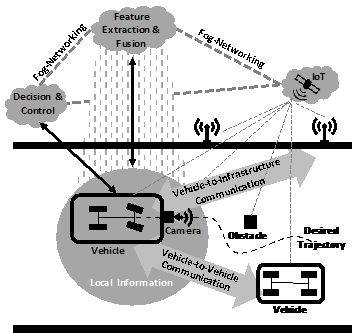 IoT-Control could help dynamic systems to analyze local information collected from their around smart environment. Cloud-fog Machine learning will predict and recognize the behavior, situation and objects in real time and make the deep extracted information available for IoT-Controller to make accurate decision. IoT-Controller has potential to automatically reconfigure own structure from one control methodology to another one based on the situation and objects understands and recognized form cloud fog machine learning. Finally, with the accurate information provided by real time data analytics algorithms, control of dynamic systems has a chance to predict their environments not only from their state variables but also from multiple smart sensors, infrastructures with real time processing in cloud fog machine learning