The Internet of Things (IoT) is arguably one of the most exciting and revolutionary technological developments of the internet age. While the definition of IoT continues to evolve within IEEE and beyond, it is generally agreed that the IoT is a network of cyber-physical devices comprising embedded electronics, sensors/actuators, software and network connectivity, enabling such devices to collect and exchange data over the internet. Current estimates are that there will be more than 25B IoT devices (some estimates call for more than 50B devices) deployed by 2020.

The current IoT leverages existing wired and wireless network infrastructures for communications and control. However, as IoT devices continue to proliferate in parallel with higher data rate communications and data services, these existing networks will become increasingly stressed and congested, particularly in remote and underserved regions of the world. Consequently, there has been a renaissance in interest and investment in space – and suborbital-based high-data-rate communications networks – the internet of space. These networks will have global impact on humanity by delivering high bandwidth information to every part of the world. The figure below shows a conceptual European communications ecosystem leveraging a satellite backbone in parallel with the existing wireline infrastructure.1 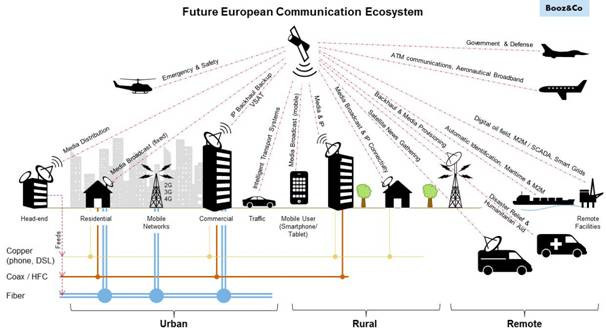 A renaissance in space-based internet projects.

Back in the 1990s, there were a number of large space-based satellite network ventures, such as Iridium, GlobalStar, Teledesic, etc. but these ventures were hobbled by high costs, and only limited numbers of relatively low-data rate satellites were ultimately deployed. However, since that time, satellite technology has greatly advanced, bringing the cost of deployment down significantly.2 "Toaster-sized" micro-satellites can be launched dozens at a time to low earth orbits (LEO), reducing launch costs, while delivering performance comparable to larger, older satellites at higher orbits. Also, operating at low earth orbits, satellites will also significantly reduce network latencies, while introducing challenging tracking, synchronization and handoff issues. Advances in microwave/mm-wave phased array technology and advanced CMOS over the last several years will also be key enablers. The new networks should not be expected to replace terrestrial networks, but will integrate seamlessly with these networks to provide ubiquitous global connectivity.

Recently, SpaceX, in partnership with Google, announced a US $B investment in a plan to deliver thousands of micro-satellites (reportedly approximately 4000) into LEO around the globe, to serve internet to rural and developing areas of the world. Similarly, a new venture, OneWeb, is proposing a 650 satellite LEO constellation, with significant investments from Virgin Group and Qualcomm. Airbus Defence and Space was recently announced as the manufacturer for these satellites.3 Facebook and Google already have begun laying plans to serve under-wired markets with drone-based and balloon-based data networks. The European Space Agency and Airbus Defence and Space are also planning a "Space Data Highway" that features earth observation satellites in geostationary orbit, and a set of LEO satellites to provide a hybrid optical/RF network for Emergency Response, Open Ocean Surveillance, Unmanned Aerial Systems communication, Weather Forecasting and Wide-Area Monitoring on the impacts of human activities on state of natural resources.4 Facebook is leading the controversial "Internet.org" to bring together technology leaders, nonprofits and local communities to connect the two-thirds of the world that doesn’t have internet access, and recently announced plans to launch a satellite in 2016 to provide internet access to remote areas of Africa.5

These space-based IoS networks represent the final frontier in the competition for connectivity.

For the IoS to serve as a backbone for the IoT, the challenges of small size and weight, low-power, and affordability of the user (device) terminals will have to be resolved. Millimeter-wave phased array technology is advancing rapidly, in conjunction with anticipated 5G system developments. Chip-scale phased array SoCs in low-cost silicon technologies with sufficient EIRP to make links with transiting LEO satellites are anticipated to be a major technology enabler as these systems become a reality.

An IEEE Future Directions Initiative incubator grant on the Internet of Space (IoS), led by the MTT Society, was recently launched. The short term goal of this initiative is to jump start a global technical community cutting across multiple hardware-oriented fields of interest including: aerospace systems; antennas; autonomous systems; communications; electronics; microwave/mm-wave technology; photonics; positioning, navigation and timing; power electronics, etc. MTT-S is sponsoring a discussion and networking session on IoS at the 2016 International Microwave Symposium in San Francisco on May 24th 2016, one of several upcoming forums to bring the IoS and IoT communities together as these technologies and systems continue to move forward.

Sanjay Raman is the 2016 IEEE Microwave Theory and Techniques (MTT-S) Future Directions Committee chair. He is a Professor of Electrical Computer Engineering at Virginia Tech, and is also serving as Associate Vice President, Virginia Tech National Capital Region, where he is responsible for planning and executing region-wide initiatives to enhance the university’s research, education, and outreach missions. In the latter role, he is leading a university level initiative focused on smart cities/IoT, urban data analytics, and policy. His research interests include RF/mixed-signal integrated circuits (ICs), RF MEMS, 3D/heterogeneous integration technologies, and wireless communications and sensor applications. He is an Elected Fellow of the IEEE.

Robert Weigel was the 2014 President of the Microwave Theory and Techniques Society (MTT-S) and 2015 Future Directions Committee chair. Since 2002 he is Head of the Institute for Electronics Engineering at the University of Erlangen-Nuremberg, Germany. Dr. Weigel has been engaged in research and development of microwave theory and techniques, electronic circuits and systems, and communication and sensing systems. In these fields, he has published more than 800 papers. He received the 2002 VDE ITG-Award and the 2007 IEEE Microwave Applications Award. Dr. Weigel is a Fellow of the IEEE, and an Elected Member of the German National Academy of Science and Engineering.

Timothy Lee is the 2015 IEEE Microwave Theory and Techniques Society (MTT-S) President. Currently he is a Boeing Technical Fellow, working in Boeing Research and Technology in Southern California. He has over 35 years' experience in the design of MMICs, microwave components and sub-systems for electronic systems. His interests in IEEE MTT-S include the continued excellence of technical journals and conferences for the microwave engineering communities worldwide and the development of microwave/wireless solutions to benefit humanitarian needs.