Real and Virtual Objects in the IoT: Two Distinct Worlds or Two Sides of the Same Coin?

The reason today for the attractiveness of a virtual world is tied to the promise of addressing the challenges that the IoT is and will be facing in the near future.1 One major cause of these challenges is the shift of the current interaction model from that based on humans looking for information provided by objects (human-object interaction), to the object-object interaction.

This interaction model will be based on objects looking for others to provide composite services for the benefit of humans, increasing the interaction complexity. Such complexity will be even higher keeping into consideration the ever-increasing variety of objects and technologies involved, and the even more rapid increase of the range of possible applications. Indeed, these applications will be executed by objects that need to be aware of the context in which they operate, so that they can directly interact with the surrounding environment.

Think about smart health applications, where sensors are needed to monitor the vital signs of a patient. Those sensors interact with each other to gather and process relative data; however, they have limited resources, in terms of both computational and communication capabilities. In a smart city, road-side units, traffic lights and road cameras collect data to provide information about the condition of roads and parking lots, but each one of them makes use of different communication solutions. In a futuristic market, the shopping experience of customers is improved by enhancing goods with RFID tags, NFC or QR codes, and to do so they need to be able to interpret information about the environment and make autonomous choices accordingly.

The above mentioned use cases show the challenges related to handling heterogeneity in order to facilitate object-object interaction, and incorporating information and services strictly linked to the real world provided through the key physical objects. To cope with these difficulties there is a need for technological solutions that augment the capabilities of the physical devices with additional functionalities and allow all of them to talk to each other at the same level to make the realization of robust applications easier. The virtualization of objects seems to be the perfect answer to this problem.

A common solution: the virtual object

Major IoT platforms have introduced their own vision of a virtual object as a digital counterpart of the real entities, with the fundamental role to bridge the gap between the physical and the virtual worlds. To this, some characteristics are considered basic and are present in most of the proposed solutions, since the virtual object is intended to support:

Starting from this foundation, the virtual object has experienced an evolution of its functionalities. A first enhancement was the introduction of a semantic description, which enriches the acquired data and makes heterogeneous objects interoperable at the virtual layer (Figure 1). Accordingly, data provided by objects are indexed making use of a common language, which expedites the discovery of services. 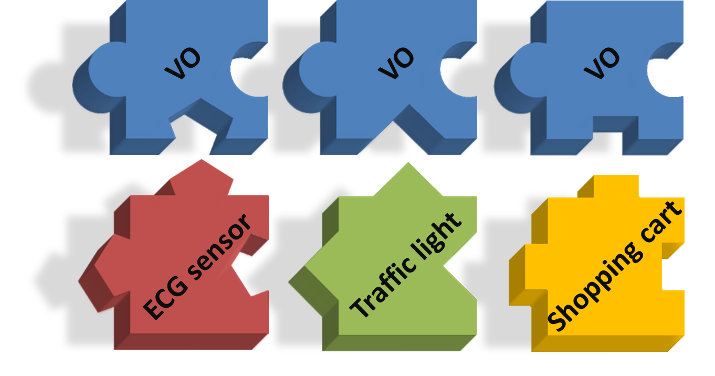 Figure 1: Different views of the objects in the real and virtual worlds.

It wasn’t long ago that the virtual object was augmented with the awareness of the context in which the physical object operates and then acquired the ability to enhance the data received by the real world objects with environmental information.2 Moreover, methods to orchestrate IoT services were proposed, in order to combine together several virtual objects and provide high-level services to the user or to the application

Recently, a new ability has been introduced to allow virtual objects to use the collected information to make relevant decisions and act upon them: the cognitive management.3 Cognitive technologies enable self-management and self-configuration, so that objects can autonomously adapt their behaviour to ambient changes, particularly in a mobile scenario.

Keeping in mind the characteristics and functionalities introduced in the literature till now, we provide a definition of virtual object4:

A virtual object is a digital representation, semantically enriched, of a real world object (human or lifeless, static or mobile, solid or intangible), which is able to acquire, analyse and interpret information about its context, to augment the potentialities of the associated services for the benefits of the quality of life of humans as final consumer of the real world data.

What needs to be done?

We believe that evolution of virtual object functionalities is in progress and that key challenges still need to be addressed.

Interoperability is one of the main concerns regarding virtualization-based IoT solutions. Although each implementation shares similar functionalities, at the moment there are neither standard formats nor recommendations to regulate their usage. Indeed, diﬀerent virtual object models have been proposed, all speaking different languages. The consequence is that virtual objects belonging to diﬀerent architectures can communicate only to a certain extent, and thus they cannot cooperate.

The expected upsurge in the number of objects involved in the IoT is going to exacerbate the scalability issue in the next few years. Virtual object life cycles will need to be thoroughly managed, so that virtual objects should be updated and deleted as soon as their usage changes or they are not needed anymore. One of the future challenges related to virtualization will certainly be virtual object garbage collection.

The scenario of objects that manage key information about the owners (us) and are augmented with the capabilities to autonomously interact with other objects belonging to other people (and companies), makes privacy concerns even more threatening than now. The virtual objects should be intelligent to select the right friends and which information to share, as well as capable to evaluate the trust of the services asking them for information. But malicious virtual objects may be smarter and reveal information leakages that we really do not want to happen. A solution to these security and privacy issues can be found in new strategies for collaborative virtual objects that may identify and isolate threads in the virtual world.

The creation of an eﬀective Internet of (every)Things to enable futuristic applications will pass through the deﬁnition of an augmented virtual object; it will encompass the capability to autonomously and adaptively interact with the surrounding environment, in order to dynamically deploy applications for the beneﬁt of humans, so as to improve their quality of life. Which principles and rules will govern the virtual objects' behaviour is still to be understood. The evolution and possible use cases that will be engendered by applications of these solutions are still unknown, but it is straightforward that they can be easily enabled by virtual objects, thanks to the ability to cope with complex networks.

4. M. Nitti, V. Pilloni, G. Colistra, and L. Atzori, "The Virtual Object as a Major Element of the Internet of Things: a Survey," in Communications Surveys & Tutorials, IEEE, 2015

Michele Nitti is an Assistant Professor at the University of Cagliari, Italy. He received his Ph.D. in Electronic and Computer Engineering in 2014. In 2010 he worked for a year as a researcher at the National Interuniversity Consortium for Telecommunications (CNIT) at Cagliari, on the development of models for network connectivity in mobile ad hoc networks. In 2013, he has been a visiting student at the Department of Management, Technology and Economics at ETH Zurich, Switzerland. His main research interests are on Internet of Things (IoT), particularly on the creation of a network infrastructure to allow objects to organize themselves according to a social structure. He is a member of IEEE since 2012.

Virginia Pilloni is an Assistant Professor at the University of Cagliari. In 2013 she was awarded the PhD degree. From November 2011 to April 2012 she was a visiting PhD student at the CCSR at the University of Surrey. She has been involved in several research projects, among which the ACCUS and DEMANES European projects, founded by Artemis Joint Undertaking within the 7th Framework Programme. Her main research interests are Internet of Things and Wireless ad-hoc networks, with particular attention to the improvement of their performance through task allocation. She is an IEEE member since 2012.

Luigi Atzori is an Associate Professor at the University of Cagliari (Italy). His interests are in multimedia communications, with special emphasis on quality of experience management, and Internet of Things, with focus on architecture definition, application deployment strategies and trustworthiness evaluation. Recently, he has been involved in projects related to multimedia quality of experience and architecture definition for adaptive networked embedded systems. He has published more than 140 journal articles and peer-reviewed conference papers. He is a senior member of IEEE.