Time is a precious and scarce resource not only to people, but also to most machines, computers, and IoT devices. Precise time and computing/communications with strictly bounded, usually, low latency are the foundations for emerging IoT applications and new user experiences. Future flexible factories, mobile and collaborative robots, autonomous systems, and virtual/immersive reality are a few examples of the next wave of applications that rely on accurate time and bounded (low) latency computing and communications.

Time-Sensitive Networking (TSN) is emerging as a toolbox of standards-based technologies, developed under the IEEE 802.1 TSN task group, to provide accurate time distribution, deterministic data delivery capabilities that will enable the next wave of time and safety-critical IoT applications and experiences. With TSN capabilities, the same network can be shared by time-sensitive and other (best-effort) types of applications, such as typical IT applications. The advances in recent wireless technologies, such as Wi-Fi 6/6E and 5G, have created the possibility to enable Wireless TSN (WTSN) and unlock scalable and highly flexible use cases. Resting on the foundation of open standards as defined in IEEE 802.1, a combination of wired and wireless TSN capable networks will be able to not only manage automated operations but to digest and react to data from multiple devices/systems in real-time. In this renaissance of highly transparent, digitally observable production pipelines, discrete systems, factories, and suppliers will be able to share real-time information across all segments of the network, both wired and wireless. This flow of time-sensitive data will fuel enhanced AI decision-making, greater efficiency, and expanding customization capabilities, among a whole host of other benefits.

Given the reliability, stability, and interference-related issues associated with wireless communications, achieving wired grade performance over wireless brings many challenges. We have discussed the main use cases, wireless technologies, and time-aware protocols for enabling WTSN in [1].

From Wired to Wireless TSN

TSN applications require careful reservation of resources (e.g. bandwidth) to ensure guaranteed data delivery. In practice, time-sensitive applications will reside within a managed TSN domain, a protected subset of the network wherein all devices are TSN-capable, which will likely include a mix of wired to wireless TSN devices. We envision WTSN as an extension of wired TSN forming a hybrid wired/wireless TSN infrastructure as shown in the figure below. 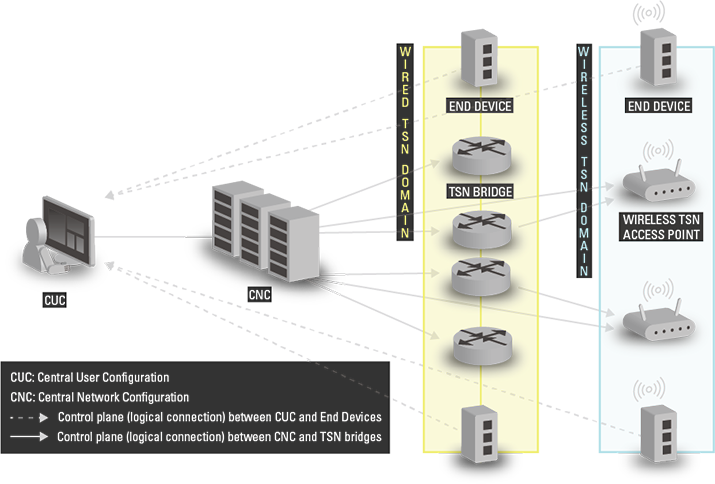 Demonstrating WTSN capabilities with real applications is critical to understand the practical challenges and prepare the technology for market adoption. We are seeing increasing research and industry efforts in this direction. For instance, the National Institute of Technologies and Standards (NIST) and our team at Intel Labs have demonstrated Wi-Fi TSN enabling a collaborative robotic work cell. TSN time synchronization (802.1AS) and traffic shaping (802.1Qbv) implemented over Wi-Fi not only supported the control tasks with low bounded latency but also enabled the robots to operate faster, with less idle time comparing to a non-TSN network. This work was recently presented and received the best paper award at the 17th IEEE International Conference on Factory Communication Systems (WFCS 2021) [2]. Demonstrations of industrial control applications have also been done over 5G systems. Autonomous Mobile Robots (AMRs) and collaborative robots are also applications that can benefit from wireless connectivity and the determinism provided by TSN capabilities.

Research Challenges and Next Performance Frontiers

Delivering wire-equivalent reliability with determinism over wireless is a hard problem, especially when operating in the unlicensed or shared spectrum. Although there has been significant progress in demonstrating low bounded latency over wireless, WTSN solutions will need to address many other challenges including resilience, security, mobility, and efficiency. Wireless networks will need to be resilient to a range of disturbances typical to wireless communications. They will need to show high degrees of fault-tolerance against interference and security threats while meeting strict time performance. Enabling redundancy, interference detection, localization, and real-time network management to ensure seamless mobility are important research areas. Ultimately, distributed IoT applications will require determinism across multiple computing and network nodes along end-to-end paths that may include wired and wireless links. Typically, applications and networking layers are designed in isolation, but co-optimizing the orchestration of computing and network resources will need to be considered to meet ultra-low latency and reach the next performance frontiers for industrial IoT systems. Related works on control-communication co-design have demonstrated promising results to increase efficiency in wireless control systems [3].

To make WTSN a reality, we will need partnerships across the industry. For instance, Avnu Alliance, an industry group developing an interoperable TSN ecosystem, has formed a Wireless TSN working group to guide the industry on market requirements, product certification, and testing. The group recently published a WTSN white paper[1] laying out use cases, architecture, wireless technologies, and standards roadmap for WTSN market adoption. WBA and 5G ACIA have also been active connecting end-users and technology provides in trials involving Wi-Fi 6 and 5G technologies, respectively.

For the moment, wireless TSN over Wi-Fi and 5G are in early stages, but analysis of current TSN, Wi-Fi, and 5G capabilities, as well as use cases and market requirements, by industry groups, such as IEEE 802.1, 802.11, 3GPP, Avnu Alliance, 5G-ACIA, and WBA revel an encouraging portrait of how the first WTSN applications will manifest. We have a clear picture of the TSN capabilities (time synchronization, traffic shaping) and applications that will be supported by wireless systems. It is also clear that hybrid wired/wireless TSN-capable networks will be required to support end-to-end applications and leverage emerging edge computing capabilities as well as virtualization of industrial applications.

Dave Cavalcanti received his Ph.D. in computer science and engineering in 2006 from the University of Cincinnati. He is currently Principal Engineer at Intel Corporation where he develops next-generation wireless connectivity and networking technologies and their applications in autonomous, time-sensitive systems. He leads Intel Lab’s research on Wireless Time-Sensitive Networking (TSN) and industry activities to enable determinism in future wireless technologies, including next-generation Wi-Fi and beyond 5G systems. He is a Senior Member of the IEEE and serves as the chair of the Wireless TSN working group in the Avnu Alliance.