The Internet of Things (IoT) promises to affect great change across multiple domains, with wireless connectivity being the key feature that unlocks the power of monitoring and computing in a plethora of applications. Whilst wireless is central to IoT, the predicted growth in traffic must be accommodated within the already crowded wireless spectrum, and IoT presents a wide range of differing wireless connectivity requirements.

Today’s IoT devices achieve two-way communication either by transmitting and receiving at different times (time division duplexing - TDD) or on different frequency channels (frequency division duplexing - FDD). These techniques are used to avoid the problem of self-interference, where the devices own transmission leaks into the receiver and obscure the much weaker incoming signal, preventing it from being decoded. However, in recent years there has been growing interest in in-band full-duplex (IBFD) technologies [1] which enable simultaneous transmit and receive on the same frequency at the same time. This could bring a range of potential benefits to IoT networks in particular.

IBFD enables bi-directional data communication using only half of the spectral resources compared to TDD or FDD. Theoretically, this doubles the link capacity but requires >100 dB of SI suppression. This is far from trivial, and involves combining multiple stages of SIC, using multiport antennas/feeding networks, feedforward radio-frequency (RF) cancellation circuits, and digital baseband cancellation (typically deploying non-linear digital signal processing) [1] (see Fig. 1). Compared to TDD/FDD, IBFD increases the cost, complexity, and power consumption of transceivers, due to the additional hardware and signal processing required. Moreover, feedforward RF cancellation involves tapping and injecting signals in the transmit and receive paths respectively, thereby adding the loss and eating into the link budget, which ultimately affects the range/cell size. For these reasons, SIC is not suitable for all types of IoT devices. In particular, low-cost sensors with extended range and 10-year battery life (e.g. smart-meters and remote monitoring applications) may not be suitable applications for SIC. This is typified by 3GPP NB-IoT, which specifies devices with half-duplex operation only [2]. An exception to this is short-range communication, where transmit power levels are lower, meaning less cancellation is required to achieve IBFD operation. For example, SIC is already used in RFIC readers, and the relatively short-range links within a home make domestic smart-devices a candidate application for IBFD. 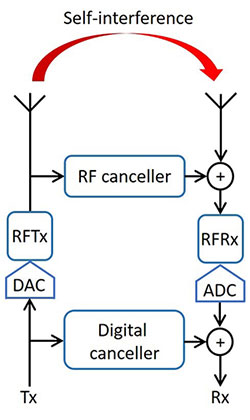 Figure 1: A Block diagram of a transceiver using multiple stages self-interference cancellation. In this design, separate Tx and Rx antennas are used to provide some passive isolation, and this is combined with Feedforward RF cancellation and digital baseband cancellation.

But whilst not every device is suited to using SIC, IoT sensor networks may still benefit from SIC by using it in the network infrastructure. SIC enables on-frequency repeaters (IBFD relays), allowing a relay node to simultaneously receive and relay data in the same frequency band. This provides coverage extension with reduced latency and improved spectral efficiency, for example improving coverage for smart meters suffering severe shadowing loss due to their obscured location. Cell-site infrastructure/access points (APs) can also operate using IBFD, but serve a network of half-duplex only devices. In this case, the AP simultaneously receives from one node and transmits on the same frequency to another. This could, for example, increase the number of nodes in a smart city network, but without increasing the circuit complexity of the nodes themselves, although interference between devices needs to be avoided/managed through scheduling.

How Else Can SIC Improve IoT?

Where power consumption and device cost are less constrained, for example in industrial applications, connected autonomous vehicles, and smart devices in the home, SIC could potentially be deployed at the device level. Here, IBFD could improve the efficiency of spectrum access in IoT networks, as devices can transmit and simultaneously monitor the spectrum for other nearby users. In contrast to traditional cognitive radio systems where sensing and dynamic access are synchronously performed in orthogonal channels, IBFD enables more flexible and agile use of the spectrum, radically changing the future IoT spectrum map [3]. IBFD can also support feedback transmission during data reception, which is beneficial in ultra-low-latency IoT applications and improves the quality of channel state information. In applications with critical secrecy requirements, IBFD enables transceivers to receive a signal, whilst simultaneously transmitting a jamming signal to prevent eavesdroppers from receiving the same [4].  By properly designed the jamming signal and/or its spatial direction, jamming signals degrade eavesdropper’s reception without affecting the desired communication channel. For IoT scenarios with wireless power transfer (WPT) capabilities, IBFD radio can be exploited in several ways [5]. Specifically, since IBFD increases spectral efficiency by allowing more nodes to be active, consequently this can lead to potential energy savings since the harvested energy from WPT devices can also be increased (ambient WPT IoT devices e.g. LPWA).  In other WPT scenarios, IBFD allows APs to generate efficient energy beams (energy beamforming) while receiving data from multiple IoT devices. 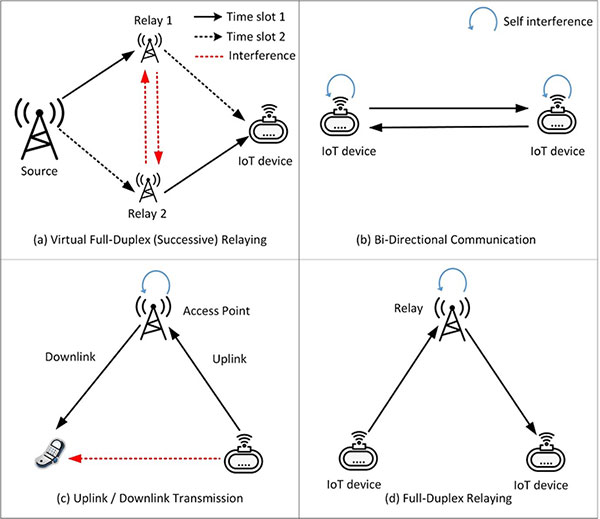 In addition to radio waves, visible light communication (VLC) can also be used to wirelessly connect IoT devices [6]. Several features of VLC such as higher bandwidth, better security, and privacy make it an ideal technology for low-cost IoT use cases such as connected toys, smart lighting, and indoor positioning. In VLC, data transmission is accomplished by switching light-emitting diodes (LED) on and off at very high speeds to modulate the light intensity. At the receiver, a photodiode is used for data detection. An important aspect of VLC connected IoT is the support for bidirectional transmission through FD operation. SIC in VLC systems is easier to design than in RF systems since LED and PD devices are directional and thus can be well isolated [7]. Therefore, most works on FD VLC systems have completely neglected the impact of SI. There are several ways of implementing FD VLC links in an IoT device. In large form factor IoT devices, LED and PD pairs can be separated to reduce the effect of SI. In other devices, vertical and horizontal polarizers can be used to construct two isolated links. Some works also propose bidirectional transmission using Red, Green, and Blue LEDs. Since different colors occupy different portions of the spectrum, the crosstalk due to simultaneous transmission and reception becomes negligible. Also in cases where the same light carrier is not preferred for the uplink, infrared of 850 nm wavelength can be used to create sufficient isolation between the uplink and downlink.  In backscatter type IoT tags, PDs, retro-reflector fabric, and LCD shutters can be used to implement low power bidirectional communication. According to this solution, a reader sends interrogation signals to form the LED-to-Tag downlink while at the same time, fallen light is retrospectively reflected by a reflector fabric and subsequently gets modulated by the closing and opening action of the LCD shutter to form uplink communication [8]. 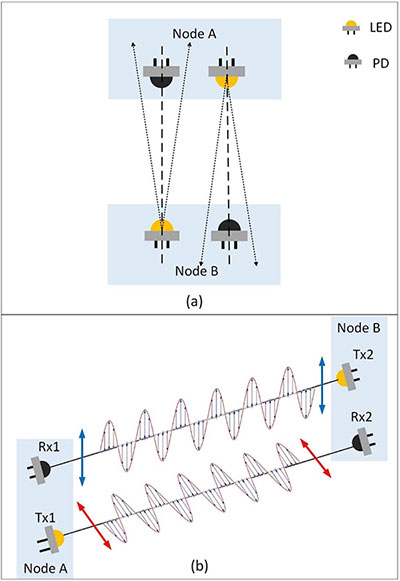 Himal A. Suraweera (S’04, M’07, SM’15) received the B.Sc. Eng. Degree (Hons.) from the University of Peradeniya, Sri Lanka, in 2001, and the Ph.D. degree from Monash University, Australia, in 2007. Currently, he is a Senior Lecturer with the Department of Electrical and Electronic Engineering, University of Peradeniya. His research interests include cooperative relay networks, full-duplex communications, multiple-input multiple-output systems, and energy harvesting communications. He is an Editor of IEEE TCOM and IEEE TGCN, and served as an editor for IEEE TWC and IEEE CL. He was a recipient of the IEEE Communications Society Leonard G. Abraham Prize in 2017.

Ioannis Krikidis (S'03-M'07-SM'12-F'19) received the diploma in Computer Engineering from the Computer Engineering and Informatics Department (CEID) of the University of Patras, Greece, in 2000, and the M.Sc and Ph.D degrees from Ecole Nationale Superieure des Telecommunications (ENST), Paris, France, in 2001 and 2005, respectively, all in electrical engineering. He is currently an Associate Professor at the Department of Electrical and Computer Engineering, University of Cyprus, Nicosia, Cyprus. His current research interests include wireless communications, cooperative networks, 5G communication systems, wireless powered communications, and secrecy communications. He has been recognized by the Web os Science as a Highly Cited Researcher for 2017, 2018, and 2019. He is an IEEE Fellow and he has received the prestigious ERC consolidator grant.

Part of this work was supported by the Research Promotion Foundation, Cyprus, under the project EXCELLENCE/0918/0377 (PRIME).