Smart cities are evolving into an exciting application test field for a number of science disciplines. As such, there is growing interest from service providers and stakeholders to integrate additional dimensions into current smart city implementations, in order to form the future smart city solutions.

However, new approaches are needed to facilitate such attempts, considering the complexity of city ecosystems, and the fact that cities are multi-sectorial by nature. There is still a lot to be desired regarding either utilizing available existing infrastructure as an experimentation testbed, or tools and systems that simplify and/or automate the use of said infrastructure. In essence, the idea is that stakeholders like companies or SMEs should benefit greatly from leveraging recent technological developments, while local governments and citizens could be able to try out solutions to challenges present in cities, creating opportunities for improving the quality.

OrganiCity [1-3] places users and communities like citizens, activists, decision-makers, researchers, and entrepreneurs, right at the heart of urban development. What we call Experimentation-as-a-Service (Eaas) is now available through OrganiCity, made possible via a set of tools that allow to deploy, develop and evaluate smart city solutions inside a multi-city IoT deployment in Europe. This is the first time such an integrated toolset is offered to the community, placing co-creation at its core. By “co-creation”, we refer to the process of involving citizens and stakeholders in designing, developing smart city solutions and using local know-how to respond to existing challenges in modern cities and their communities, which have not been solved by more conventional top-down approaches. OrganiCity federates IoT data and resources from 3 cities: Aarhus (Denmark), London (UK) and Santander (Spain). The platform is built on the principles of the Open & Agile Smart Cities (OASC) initiative [4] and unifies existing infrastructures comprising thousands of IoT devices, heterogeneous urban data streams, and services. At the same time, citizens are actively involved in the project by shaping application use-cases and contributing with data.

Running publicly since October 2016, OrganiCity offers a set of tools that aim to provide multiple opportunities for co-creation within the project, providing readily available functionality or can be used to implement novel solutions on top of them. These tools are aimed to be used by both advanced users (developers), as well as less technical-savvy ones to create and validate new services and applications in the real world.

We divide these tools into 3 general categories. In the first are tools for the development of new applications via which users can implement mobile applications with limited functionality. E.g., experimenters can present assets within the facility on a map or contribute data annotations. Experimenters can use smartphone sensors and invite OrganiCitizens to gather information during their everyday commute or create virtual sensors over the data federated within OrganiCity. In the second category, additional tools allow the integration of new hardware devices within OrganiCity. Finally, we have developed tools for targeted purposes within experiments, as to allow experimenters to subscribe to OrganiCity data streams from web applications, or administer communities of users participating in experiments, and implement incentivization mechanisms. Figures 1-3 showcase aspects of the toolset. 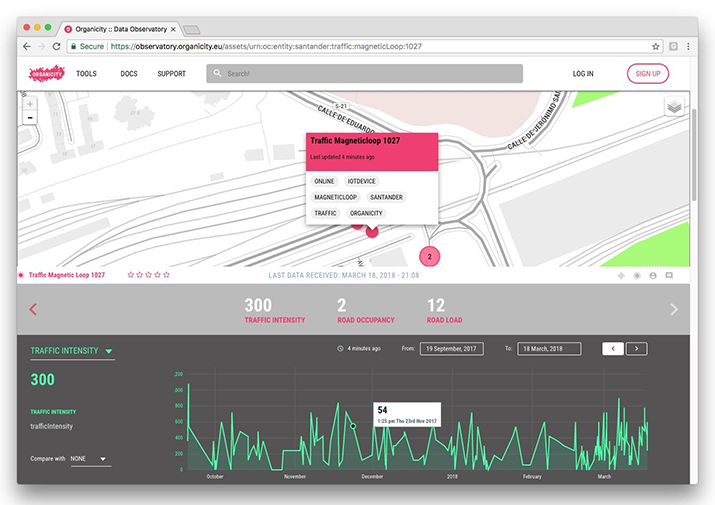 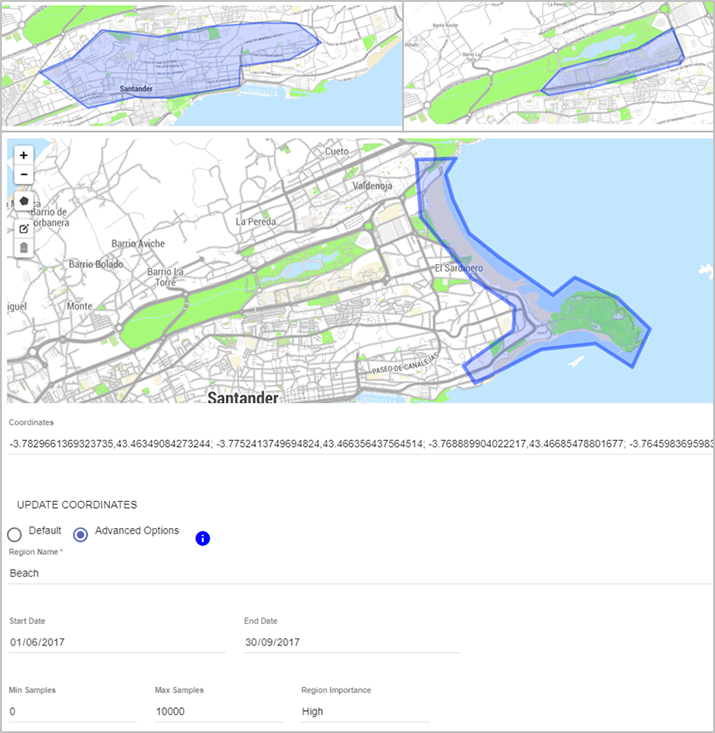 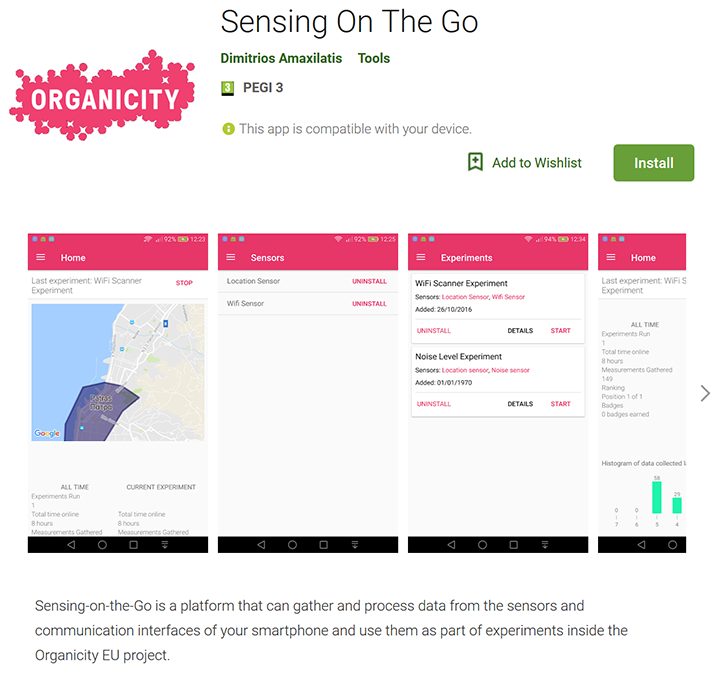 Experiments through OrganiCity, and the Future of EaaSS

OrganiCity has made its infrastructure available via open calls for experimentation, offering funding and mentoring for teams interested in implementing their ideas using OrganiCity’s infrastructure and toolset. Experimenters were invited to submit their ideas based on a 6-month implementation schedule. These open calls were supported by a total funding of 1.8 million euros.

During these open calls, a total of 43 experiments were approved for funding and were implemented in the 3 cities of the project, i.e., Santander in Spain, London in UK and Aarhus in Denmark, as well as 10 other cities in Europe and Latin America, in which experimenters utilized additional IoT infrastructure, e.g., mobile devices. The feedback from these teams suggests so far that the EaaS approach can actually produce tangible results as a means of prototyping new smart city applications, especially when there is a focus on involving citizens in the process, and that it is both feasible and reasonable in certain cases to use the OrganiCity model in this application domain. As the project nears its completion (July 2018), we will continue with the evaluation and presentation of its results to the research community.

This work was supported by the OrganiCity project funded by the European Union, under grant agreement No. 645198 of the Horizon 2020 research and innovation program.

Georgios Mylonas is a senior researcher at Computer Technology Institute and Press “Diophantus”, Patras, Greece. He received his Ph.D. from the University of Patras. His research interests include IoT, distributed and pervasive computing and smart cities. He has been involved in the AEOLUS, WISEBED, Smartsantander and OrganiCity projects, focusing on algorithmic and software issues of wireless sensor networks. He is currently the coordinator of the Green Awareness in Action (GAIA) H2020 project.

Dimitrios Amaxilatis received his DEng in Computer Engineering and MSc in Computer Science from the University of Patras, and currently pursues his Ph.D. at the same University. Since 2010, he has been with the Computer Technology Institute in Patras, Greece. He was also a member of the founding teams of two technological startups in the fields of microprocessor programming (codebender.cc) and home automation (Sensorflare), as well as the Patras hackerspace (P-Space). His research interests include distributed algorithms, wireless sensor networks, home and building automation, smart city, and participatory sensing applications.

Luis Diez received his M.Sc. and Ph.D. from University of Cantabria, Spain, in 2013 and 2018 respectively. He has been involved in different international and industrial research projects. He is currently a Senior Researcher at the Network Planning and Mobile Communications Laboratory, University of Cantabria. His research interests are resource management in wireless heterogeneous networks and IoT service provisioning.

Lasse Steenbock Vestergaard received his M.Sc. in Information Science from University of Aarhus, Denmark, and is currently pursuing a Ph.D. focusing on IoT prototyping within Smart Cities at the Alexandra Institute. He has been involved in several national and international research and innovation projects including OUTSMART (FP7), SmartSantander (FP7), CityPulse (FP7), OrganiCity (Horizon2020) and Synchronicity (Horizon2020). His research interests are creative coding, API usability, and IoT prototyping.

Etienne Gandrille received his Ph.D. from the University of Grenoble. As a researcher at Commissariat à l'Énergie atomique et aux Énergies alternatives (CEA), he research interests focus on Internet of Things, Smart Cities, and Open Data. He has been involved in several international research and innovation projects including SocIoTal (FP7), OrganiCity (Horizon2020), BigClouT (Horizon2020) and Brain-IoT (Horizon2020).