IPv6 and Internet of Things: Prospects for Latin America

“The Internet needs to keep evolving and there are things that should happen beyond IPv6, but to overcome the present address space exhaustion, we need to implement IPv6 essentially everywhere” (Vint Cerf, father of the Internet). Information Technologies (IT) experts predict that there will be over 50 billion ‘connected devices’ by 2020. However, despite the existence of Network Address Translation (NAT), the current Internet Protocol version 4 (IPv4) offers just under, 4.3 billion unique IP addresses. Internet of Things (IoT) clearly needs more IP addresses than IPv4 can provide. As a result, there is no IoT without IPv6.

The rapid and massive proliferation of smart mobile devices on the Internet, broadband and cloud services, have already exhausted the available IP addresses in its current Internet Protocol, IPv4. The new Internet Protocol version 6 (IPv6) extends the IPv4 address space from 32 bits to 128 bits (340 undecillion or 340 trillion trillion trillion), which should be sufficient for the next decades.

IPv6 is about vision, leadership, innovation and competitive edge. IPv6 enables to enhance the provision of Internet services and become a more competitive and innovative player for IoT, SmartCities, SmartGrid, Mobile Internet, eGoverment, eEducation, eHealth and sensor networks services. It also improves the quality of public services, energy con­sumption and mobility through the capacity to process big data that will help to bring better solutions to crucial sustainable development issues.

Today, more than 19% of wired-up Internet users are already connected to IPv6 services. IPv6 seems to be new, though in fact it has been around since 1999, and until 2012 experienced a rather slow uptake (see Fig. 1). IT experts predict that by 2019, the barrier of 50% will be surpassed. 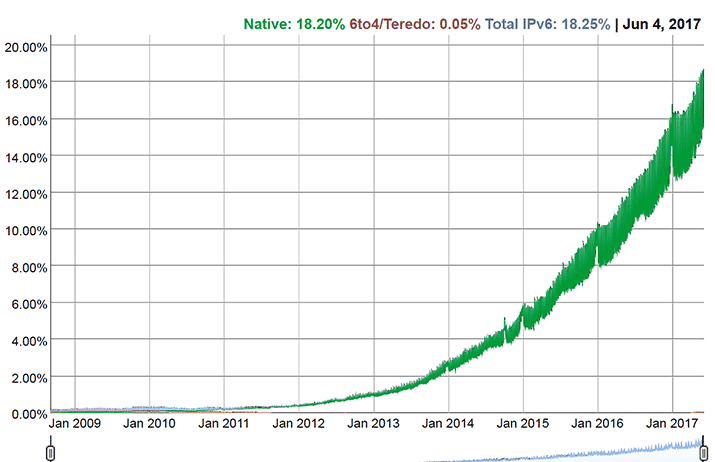 Today, most operating systems are IPv6-enabled by default. In the next decade, IPv6 and IPv4 will co-exist, adding more complexity to an already multi-diverse network environment of things, mobile devices and clouds; while this is the easier path to follow from the point of view of a smooth migration, it increases the points of vulnerability from a holistic design viewpoint. Security needs to be taken into account from day 1 of the IPv6 adoption process and the possibility of addressing connected objects individually rather than by means of gateways, this gives IPv6-based systems a competitive edge in terms of simple, uniform and more easily secured architectural design.

According to McKinsey, the IoT market will generate between $6 to 10 trillion a year by 2025, which represents 13% of the global economy and, more than 40% of this growth could be generated in emerging nations. Opportunities for low-cost, wide coverage networks to accomplish services that solve local issues are tremendous. Thus, the future of leveraging IoT for emerging countries is promising.

The IoT adoption, mobile Internet, fixed broadband, overall data traffic and contents in the region are all projected to grow in the years to come. Leading countries, like Brazil and Mexico, are already developing some large-scale IoT projects to achieve real solutions in different industry sectors. Brazil’s Secretary of Information Technology Policies said, "We need to work on real projects and achieve real progress. Brazil's problems and solutions sometimes are not the same as those in Europe, and as such can be leveraged and adapted by the other parties." In 2017, the government has agreed to the creation of a “Brazilian Association of IoT” to include private sector entities, telecom operators, academia and startups to foster open innovation in all sectors of society.

Latin America is currently shaping its future with a greater use of Internet technologies (broadband, mobility, PKI, IPv6), new business models and applications. As the demand for Internet services continues to grow, more nations, especially late-comers, recognize the great importance of adopting IoT and being among its early adopters. Today, IoT is more relevant for lesser developed than for developed regions as an enabler for technology development and technology integration with technologically advanced countries. However, the region still faces challenges in strengthening the efficiency of public agencies, policies, levels of expertise in different industry sectors and the quality of infrastructure.

The region is also closing the gap with the rest of the world, in particular in mobile services, as more than 400 million people will be connected in the next decade.

The IoT’s impact in Peru follows the world development trend with a growing demand of specialized and intelligent solutions by the local industry. This requires advanced networks, locally developed solutions and greater skills and knowledge, crucial for development and job creation in some specific sectors such as: education, health, government and new business models for industries like smart-cities, financial services, energy, insurance, agro-export, agriculture, mining, oil, gas, ‘clean technologies’, manufacturing and so on.

The industry has also begun to invest in “I+R+D”, to develop more IoT projects in response to state funds and tax incentives (Produce, FINCyT). Today in Peru, academia and startups develop most of the local robotic and artificial intelligence projects.
A few IoT examples among many others (Cisco Peru, source),

Peru was the fastest growing economy in Latin America in 2016 and Brazil, the biggest. Compared to other economies of the region, the Peruvian ICT market is still small, according to the Global Entrepreneurship Monitor however, Peru continues to be Top 4 in entrepreneurship, having an Entrepreneurial Activity Rate (EAR) of 25.1%, at a rate well above the regional EAR, 18.8%.

Peru, Ecuador and Brazil are the top three countries with the highest IPv6 adoption rate in the region. Peru has been the leading country in IPv6 deployment in Latin America since 2013 – Top 5, Top 10 and Top 15. Telefonica del Peru (TdP) is a leading provider in the region because of its IPv6 expertise, infrastructure and commitment.

In 2009, TdP was warned that Peru had enough IPv4 addresses to last only until 2012. Telefonica Madrid chose Peru to run the project ‘Switching a country to the new IPv6 protocol’. TdP deployed IPv6 native connectivity to more than 3 million broadband residential customers in Lima (fixed ADSL lines). Today, TdP is expanding IPv6 to the rest of the country and mobile services. Peru has currently an IPv6 deployment rate of 17%, according to APNIC lab’s IPv6 measurement. TdP has an IPv6 deployment rate of 14%, according to World IPv6 Launch.

The government and the IPv6 Council of Peru have been quite active in promoting the leading IPv6 role of Peru to the private sector, academia, local enterprises and the local administration through awareness events and workshops.

Rosa Delgado, ICT Consultant, received an Engineering Degree from the Universidad Nacional de Ingenieria of Lima, Peru. She also holds a Master degree in ‘Digital Communications’ from Warwick University, UK and a ‘Communications and Business Strategies’ from the Université de Genève.  She is an Emeritus Internet Society Trustee (www.internetsociety.org). She was involved in the creation of the IPv6 Task Forces of Peru and Egypt and since 2000, founding member of the European Union IPv6 Task Force. She was the decisive force behind the creation of dot-Aero, dot-Post, dot-Eurovision and dot-Radio Internet Top Level Domain Names. She provides mentoring to new tech and innovation startups and accelerators. Rosa is currently President of the IPv6 Forum of Peru working with government agencies to ensure IPv6, Internet of Things and Smart Cities are taken in consideration in government and private sector plans. She previously worked at the World Health Organization (WHO, www.who.org), WiseKey (www.wisekey.com), Société International de Télécommunications Aéronautique (www.sita.aero), International Telecommunication Union (www.itu.int), United Nations (Disaster Emergency Network) and CERN (www.cern.ch). In 2017, she received the IPv6 Forum Award, for supporting the IPv6 adoption in Peru (http://peru.com/epic/tecnologia/nap-reconoce-aporte-instituciones-migracion-al-ipv6-noticia-495984)