Giving Power to the Edge: How to Improve IoT Performance and Keep Security

Today, about 92% of the globally deployed LPWAN are based on the following four technologies: LoRaWAN, Sigfox, NB-IoT, and LTE-M. IoT Analytics forecast [1] indicates these four flavors of LPWAN as the fastest growing IoT connectivity technologies over the next few years. In this post, we focus on LoRaWAN [2], an LPWAN technology developed by the LoRa Alliance as an open standard that can operate over private and-or public infrastructures at a global scale. It defines a basic architecture involving IoT devices (End-Devices, ED) transmitting their data towards Network Gateways (GW). LoRaWAN networks are based on a highly centralized architecture. A single Network Server (NS) manages all data collected by IoT devices and all decisions about network configuration. On the one hand, the centralized approach helps decouple the network infrastructure from the cloud-based applications that rely on messages arriving from the IoT devices. On the other hand, numerous challenges arise like system scalability, stability, and a lack of proper monitoring and supervision for configuration operation and maintenance.

The ELEGANT Paradigm for Edge-Computing

The ELEGANT paradigm bridges the gap between the Cloud and Edge Computing ecosystems by providing a unified, secure, seamless computational and programming environment for IoT/Big-data applications. ELEGANT builds upon a stream-based processing architecture that enables network optimization operations and Big Data analytics applications deployed at the cloud level to be transparently executed at the edges of the network.

Figure 1 (left side) depicts the operation of LoRaWAN deployments where all packets are transferred to the cloud for centralized processing. The right side of Figure 1 indicates how the network is restructured based on the ELEGANT paradigm, optimizing overall performance in terms of latency, privacy, security, and IoT resource usage.

LoRaWAN supports multi-rate by exploiting six different Spreading Factors (SFs), from 7 to 12, which enable suitable modulations on the radio spectrum [3]. The data rate selection is a trade-off between communication range and time-on-air (ToA). LoRaWAN allows EDs to individually select the SF employing an Adaptive Data Rate (ADR) scheme. Alternatively, the NS can also coordinate the data rates due to its central role. The NS needs to monitor the operation of the network by inspecting the packets received from all the EDs in the network, with a clear impact on the overall scalability of the network.

Following the ELEGANT paradigm, the execution of the EXPLoRa-C ADR algorithm [4] is distributed across the edges of the network. Each distributed instance of the EXPLoRa-C ADR algorithm optimizes the network resources of a given subnet by equally balancing the total offered load spent on each SF. EXPLoRa-C implements the load balance and diversity criteria in terms of ``sequential water-filling''. For facilitating the selection of a data rate compatible with the link budget, EDs are ordered according to their Received Signal Strength Indicator (RSSI) value from the closest GW (from the highest to the lowest value). SF allocations are performed sequentially by verifying: i) the link margin from the candidate SF, ii) the satisfaction of the various optimization criteria, iii) and the constraint on the maximum number of EDs on each SF. Decisions are taken at NS and in multiple steps, in which EDs are sequentially processed and allocated to a given SF or moved to a next decision step.

Figure 2 (left side) shows the EXPLoRa-C ADR algorithm's flow and how each phase is assigned to different Edge resources. The NS groups the network information such that the complete network map of the network is built. In the sequel, the NS divides the network map into the available Edge resources. The performance of the distributed approach is shown in Figure 2 (right side), parallel computation reduces the execution time especially when the EDs number increases. As a result, the ELEGANT-based distributed ADR algorithm improves the IoT system scalability.

LPWAN networks are used for delivering smart metering services. Information collected from ED and delivered to the smart services is sensitive and needs to be protected since (a) the ED are deployed in potentially remote locations, (b) packets need to travel across long distances to reach a GW, (c) the infrastructure is designed for long-time operation, spanning more than 15 years [6]. Regardless of the way communication is protected using network and application-level encryption, there are still several weaknesses connected with device identification that may lead to the disclosure of sensitive information, with a direct impact on the privacy of the end-users [5]. 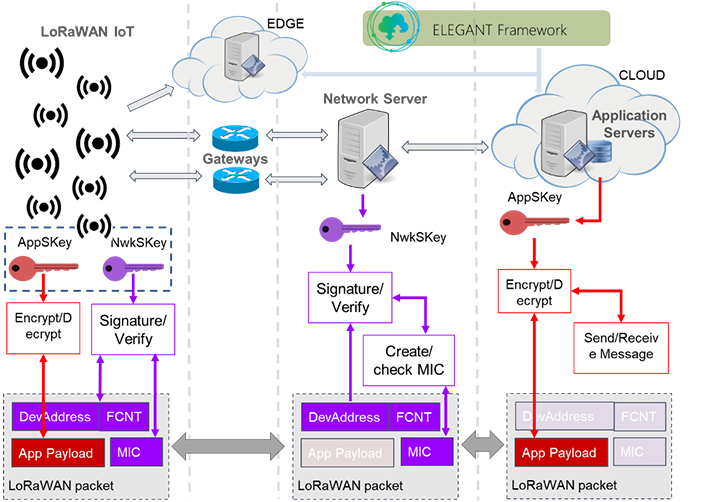 Water metering, a major challenge for most cities around the world, is achieved by collecting data from many thousands of water meters using either on-site visits or manual drive-by methods. The main obstacles to the digitisation of this process are the number of water meters and their operational lifetime requirements, making the use of technologies like 4/5G-based connectivity highly inefficient and inappropriate. Following the ELEGANT paradigm, a hierarchical data-processing architecture is introduced using multiple layers of LoRaWAN, Wireless-MBus and 4/5G mobile networks and edge computing to increase the data collection rates, prolong the lifetime of the whole infrastructure, minimise the additional cost while increasing the benefits, and enabling the data-driven extraction of useful conclusions like consumption profiling or incident detection [7]. A stream-based water consumption profiling algorithm is deployed to each edge resource to identify common patterns in water consumption across buildings within the same subnet. The spatial relationship between the buildings is propagated within the hierarchical data-processing architecture to identify patterns of usage between buildings across subnets [8].

Francesca Cuomo is a Professor at the University of Rome La Sapienza, and a  research associate with CNIT. Her current research interests focus on: Vehicular networks and Sensor networks, Low Power Wide Area Networks and IoT, 5G Networks, Multimedia Networking, Energy saving in the Internet and wireless systems. She has participated in several national and European projects on wireless network systems such as the RAMON, VICOM, INSYEME, IST WHYLESS, IST EPERSPACE, IST CRUISE, H2020 symbIoTe. Francesca Cuomo has authored over 130 peer-reviewed papers published in prominent international journals and conferences. She has been in the editorial board Computer Networks (Elsevier) and is a member of the editorial board of the Ad-Hoc Networks (Elsevier) and IEEE Transactions on Mobile Computing. She has been the TPC co-chair of several editions of the ACM PE-WASUN workshop, TPC Co-Chair of ICCCN 2016, TPC Symposium Chair of IEEE WiMob 2017.

Ioannis Chatzigiannakis holds a Ph.D. from the University of Patras (2003) in the area of ad-hoc wireless mobile networks and a BEng from the University of Kent (1997) in Computer Systems Engineering. He is an Associate Professor at the "La Sapienza" University of Rome at the Department of Computer, Control and Management Engineering. He has co-authored over 150 scientific publications in areas related to dynamic distributed computing, the Internet of Things, algorithm engineering and software systems. He has been a project manager and site leader for numerous research & development projects funded by the EU in the context of H2020, FP7, FP6, and EDA. He has participated in the research & development teams of industrial projects. He has an active role in many open-source projects and regularly participates in open-source international events. He has started a number of technology-based start-ups related to the Internet-of-Things. He has served as the Secretary of the European Association for Theoretical Computer Science (EATCS).

Ilenia Tinnirello is a Professor at the University of Palermo. She received the Laurea degree in Electronic Engineering and the Ph.D. in Communications in April 2000 and February 2004. Her research activity has been mainly focused on wireless networks and, in particular on multiple access algorithms with quality of service provisioning; cross-layer interactions between access solutions and physical layer; mobility management and load balancing in wireless packet networks; methodologies for experimental characterization of wireless local area networks; 5G access networks. In addition, she has been involved in various national and international research projects, among which the European projects FP7-FLAVIA in the role of technical manager, the FP7-CABIN CREW, and H2020 WiSHFUL in the role of unit coordinator and WP leader, the H2020 Flex5Gware and H2020 SymbIoTe projects as a participant.

Domenico Garlisi is a CNIT researcher working at the Palermo research unit. He received a Ph.D. degree in Electronic and Telecommunication Engineering at the University of Palermo in 2014. He has been involved in several national and European research projects, among which the H2020 WiSHFUL project, with an important role in the design, documentation, and maintenance of the WiSHFUL software framework. He has worked on the H2020 Flex5Gware project and the H2020 Symbiote project. He is involved in a national project on IoT Low Power Wide Area (LPWA). He has been a visiting researcher at the Department of Computer Science, UCLA, in 2013, working on wireless protocol optimizations for vehicular networks. His main research is related to wireless networks, software-defined radio, sensor networks, vehicular networks, and wireless systems for user localization and testing.

Pietro Spadaccino is a PhD student at Sapienza Università di Roma in Information and Telecommunication Engineering (ICT). He received a master's degree in Engineering in Computer Science in 2020. He has been working on VANETs designing algorithms for message dissemination. He has published several papers on LoRaWAN analyzing the security of the protocol. He is involved in the European project H2020 Horizon ELEGANT. His main research is related to LoRaWAN, IoT Low Power Wide Area (LPWA), security, and distributed systems.