The concept of Intelligent Reflecting Surface (IRS) has emerged as a transformative and revolutionary technology for providing seamless coverage and to achieve energy and spectrum efficiency for cost-effective wireless networks.

The architecture of the IRS comprises of arrays of passive and reconfigurable antenna elements printed on a low-cost substrate [1]. Each element in the IRS structure is equipped with a phase shifter to control the transmission of the incident signal [2]. The IRS reflects the incident plane wave in the form of a beam in the desired direction by adjusting the phase difference between each passive element [3]. Although the IRS itself is in the infancy phase, its applications and utility in other domains are growing exponentially.

Using IRS for the Internet of Things (IoT)?

Typically, the Internet-of-things (IoT) applications range from monitoring services in remote locations to continual sensing of the environment [4]. However, the limited power of such IoT devices restraint the transmission range. The monitoring services can be implied in different industries, which may vary from health management using wearable devices, tackling emergencies in disaster scenarios, etc. requires information to be uploaded without being lost. To effectively handle such situations, the key property of IRS, i.e., coverage enhancement, may be helpful for enhancing the functionality of IoT devices. Therefore, for the uninterrupted operations of IoT devices with improved coverage, the use of the IRS with the IoT is one of the cost-effective and feasible options.

Due to the low-power nature of IoT devices, relays provide an alternative path (non-line of sight) to overcome the channel impairments that occurred due to the presence of obstacles between the source and the destination device. There are several protocols of relay communication, e.g., amplify-and-forward, decode-and-forward, compress-and-forward, etc. The presence of relays provides an additive advantage to the IoT network and brings an exponential increase in the performance. However, there are some disadvantages to using them, which are often overlooked. We have pointed out the following key issues that may arise due to the presence of relays in the IoT network;

IRS can be considered as a complementary technology to overcome cost, security, power, and energy efficiency issues by providing more control over the single propagation using software-controllable reflections, omitting the need to perform decoding of the signal [6]. Looking from the IoT perspective, the devices which are IoT enabled having power constraint can be benefitted from the IRS. For instance, the authors in [7] compare the performance of a network-enabled with a decode-and-forward relaying protocol against the network. It was claimed that an IRS-enabled network can achieve higher energy efficiency in comparison to decode-and-forward relay for very high data rates and it has been shown in [7] using the following figure. 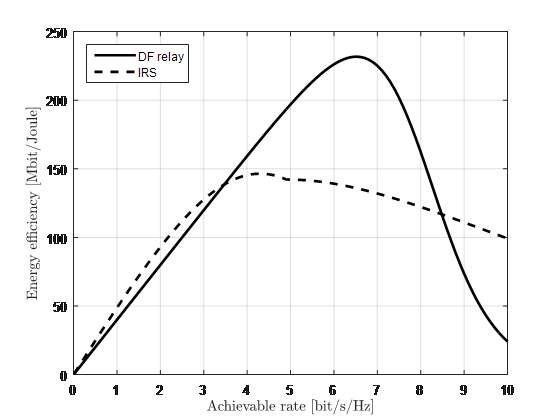 Figure 1: Comparison of energy efficiency vs. data rate for IRS and decode-and-forward relaying.

The merger of IRS in IoT networks is still a new and less-evolved area of communications. However, it has the potential to open new avenues and provide massive opportunities for the research community. We hope that the above discussion will open a new chapter in the domain of the IRS and would provide useful guidance for investigating future IoT networks. The power constraint among the IoT devices can be optimized by using the IRS technology, hence it would be critical for improving their functionality.

Muhammad Ali Jamshed received his B.Sc. degree in Electrical Engineering from COMSATS University, Islamabad, Pakistan, in 2013 and the M.Sc. degree in Wireless communications from the Institute of Space Technology, Islamabad Pakistan, in 2016. He is currently with the Institute for Communication Systems (ICS), 5G Innovation Centre (5GIC), University of Surrey, Guildford, UK. He was nominated for Departmental Prize for Excellence in Research in 2019 at the University of Surrey.

Furqan Jameel received his B.Sc. in electrical engineering (under the ICT R&D funded program) in 2013 from the Lahore Campus of COMSATS Institute of Information Technology (CIIT), Pakistan. In 2017, he received his M.Sc. degree in electrical engineering (funded by the prestigious Higher Education Commission Scholarship) at the Islamabad Campus of CIIT. In 2018, he visited Simula Research Laboratory, Oslo, Norway. Currently, he is with the Department of Communications and Networking, Aalto University, Finland. He was a recipient of the Outstanding Reviewer Award in 2017 from Elsevier.