Fostering Authentication and Authorization in the Social IoT through MQTT-Auth

The Internet of Things (IoT) is becoming more and more an integrated system of intelligent devices, electrical appliances, personal computers, servers, embedded boards, and so on, endowed with well-defined and standardized communication protocols.

These standard communication paradigms are powerful drivers allowing IoT devices to communicate directly with the external world, as well as to participate in communities of objects, to create groups of interest, and to take collaborative actions with the objective to facilitate service and information discovery for both machines and human beings [1]. These capabilities are driving more and more the IoT towards the so-called “social IoT”, an actual social network of intelligent objects with the establishment of direct relationships across smart devices themselves [2,3]. These relationships can be of various kinds:

and can be used to establish direct machine-to-machine interactions, consume services from other devices, advertise services and use offered resources to realize complex services in favor of human beings [4].

On the other hand, this growing consciousness and awareness of the smart objects should be carefully monitored since the security of their services, or of the data they manage, is an everlasting issue. In fact, in the last years, large Distributed Denial of Service (DDoS) attacks took place, with unprecedented volumes of data used to knock-down various Internet services directly or indirectly connected to IoT devices. A well-known example is the Mirai malware, speciﬁcally designed to attack and hijack IoT devices and to transform them into bots, afterward exploitable to carry out coordinated attacks [5].

MQTT (Message Queue Telemetry Transport) [6] is a lightweight publish-subscribe messaging protocol, which is rapidly becoming a de facto standard for many IoT communications. It is mainly designed for Machine-to-Machine (M2M) communications, even if it is employed also by the popular Facebook Messenger, due to its very low computation load, particularly appropriate for resource-constrained environments. MQTT works well also in not reliable scenarios, i.e., with limited bandwidth and high latency, since it can guarantee the delivery of messages to all subscribers. Its inherent simplicity, support for QoS, lack of complex management and flexible payload format make it suitable for every IoT and social IoT scenario.

Unfortunately, MQTT speciﬁcation does not include any security-related mechanism, apart from an optional authentication by means of username and password. This security lack, if not filled during the deployment by means of ad-hoc mechanisms (e.g., establishing IPSec VPNs or TLS connections), may lead to some system vulnerabilities. For this reason, proper security solutions for MQTT are expected in order to guarantee an adequate level of security in terms of authentication, authorization, and confidentiality.

Authentication and Authorization for MQTT

MQTT-TLS profile of ACE (Authentication and Authorization for Constrained Environments) [7] is a recent Internet draft trying to set up a standard for endowing MQTT with authentication and authorization capabilities. However, it is based on an Authorization Server for communicating the tokens to the broker and to the clients (either publishers or subscribers); moreover, it relies upon TLS for guaranteeing confidentiality, possibly adding implementation complexity.

When considering a more decentralized and distributed scenario, like the one of the social IoT, a lightweight solution, called MQTT-Auth, has been recently proposed [8] [9].

MQTT-Auth exploits the AugPAKE algorithm [10] for guaranteeing confidentiality. It also uses two novel tokens, one to authenticate the creation and the publishing on a certain topic at the broker side, and a second one to authorize access to a specific topic on the part of other, trusted, subscribers. These tokens can be also applied to a hierarchy of topics by means of wildcards, i.e., symbols replacing explicit topics.

The usage of the tokens is transparent on the point of view of the broker, which is unaware, in advance, of the legitimate topics and subscribers. The broker has only to create an AuthenticationTopic and a temporary topic, named after the ClientID, to allow for the AugPAKE message exchange.
The authorization token, needed to access data coming from the publishers on a particular topic, is transferred to the legitimate subscribers through a secure side channel. This side channel, in the proposed versions of MQTT-Auth, is a direct visual channel in which the authorization token is displayed, for example, in the form of a QR code.

MQTT-Auth requires very few modifications, with respect to standard MQTT, since it permits to directly encapsulate AugPAKE messages, as well as the novel tokens, directly in the fields of standard MQTT messages.

MQTT Authentication and Authorization in the Social IoT

One key point in MQTT-Auth is the possibility to exchange a piece of information (the Auth2 token), through a secondary secure channel. In the original proposal, only a visual means like a readable token or QR code are indicated as examples.

However, in case of social IoT, other mechanisms can be successfully used as a secure side channel, in particular exploiting the social relations amongst participants. On the other hand, social IoT scenarios, where devices have to communicate trustworthily with each other, in an ecosystem where there is the chance that no human interactions take place, may benefit from an authorization mechanism like MQTT-Auth.

The foreseen advantages of combining the two systems could be summarized as follows: 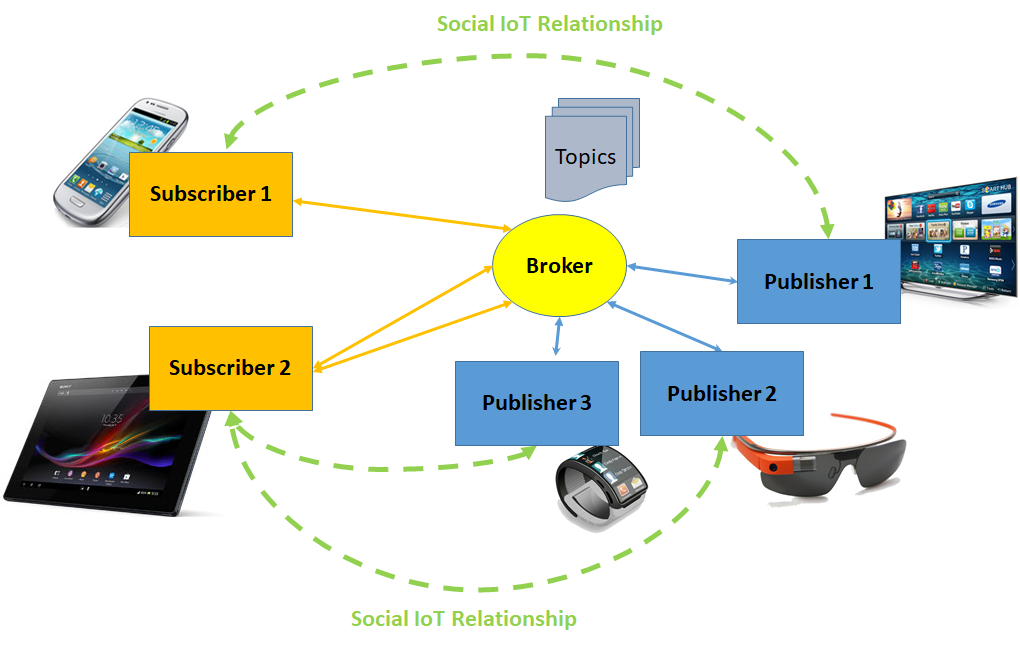 Figure 1 shows a social IoT scenario, where publishing and subscribing smart objects exploit social IoT relationships for setting up a secure side channel used to exchange the MQTT-Auth authorization token.

Despite the aforementioned benefits and advantages, some challenges are still to be resolved to deploy effectively MQTT-Auth for a social IoT scenario. First, the discovery and choice of the most suitable social relationship to exploit for transmitting the authorization token. This and the degree of trustworthiness of the relationships may change over time causing possible periods of out-of-service in case the trust of certain devices towards other companions decreases under a certain critical threshold. Second, the possible need of multiple brokers in order for the social smart objects to compose a complex service. There is the possibility to federate brokers in MQTT specifications, but the application of MQTT-Auth to bridging or clustering techniques, involving many brokers, has not yet been studied or analyzed, to the best of our knowledge. Third, smart social objects have to be endowed with hardware capable of performing in a lightweight way, the operations involved in all MQTT-Auth phases, i.e., the creation of the shared secret key through the AugPAKE procedure, and authenticated encryption with AES and at least a 256-bit key.

The authors want to thank Prof. Massimo Vecchio for the fruitful insights regarding the security in MQTT, Mr. Marco Calabretta for developing the running code of MQTT-Auth and Mr. Giovanni Perrone for the help in enlightening some useful details of MQTT standard.

Riccardo Pecori got his Ph.D. in Information Technology from the University of Parma in 2011. He has been Adjunct Professor of various courses regarding telecommunication networks, informatics, didactics of telecommunications, cybersecurity for both University of Parma and eCampus University. Since 2015 he has been Assistant Professor of Computer Science at eCampus University teaching Computer Security, Network Security, and the Internet of Things. He is editor of “Future Generation Computer Systems” and has been TPC member of various conferences about computer science and telecommunications, organizing also a special session on “Social Internet of Things” at ISWCS 2017. His research interests regard network security, security in the Internet of Things, educational and social Big Data analysis.

Luca Veltri is an assistant professor at the Department of Engineering and Architecture of the University of Parma, teaching classes on Communication Networks, and Network Security. From 1999 to 2002, before joining the University of Parma, he has been with CoRiTeL, a research consortium founded by Ericsson Telecomunicazioni, where he led different research projects in networking and multimedia communications. He participated also in several research projects funded by the European Union, by the European Space Agency, and by the Italian Ministry of University and Research. His current research interests include Internet of Things, Software-Deﬁned Networking, and Network Security. He is a co-author of more than 70 papers on international conferences and journals.