The Things Network has crowdsourced a complete city-wide Internet of Things data network with the people of Amsterdam in six weeks. The data network uses a new technology called LoRaWAN™ that features low battery usage, long range and low bandwidth and allows for things to talk to the internet without 3G or WiFi. The Things Network has a mission to build a decentralized, open and crowdsourced IoT data network owned and operated by its users in every city in the world

LoRa is a wireless modulation technology that provides the physical layer for long range communications, while ensuring low battery usage. It operates in the license-free ISM bands all around the world (incl. 433, 868, 915 MHz).

LoRaWAN™ is a communications protocol and architecture that utilises the LoRa physical layer. Within the LoRaWAN standard, data rates are defined that range from 300bps to 5.5kbps, with two high-speed channels at 11kbps and 50kbps (FSK modulation). LoRaWAN supports secure bi-directional communication, mobility and localization.

A message transmitted by a device can be received by one or more gateways. There is no association between the device and the gateway: all gateways will forward the received messages to the network for processing. The server architecture will take care of getting these messages to their associated applications.

To scale the deployment of LoRaWAN devices and gateways in a dense environment (e.g. within a city), transmission takes place on different channels and at different data rates. The data rate influences the distance over which data can be communicated. Transmissions at the same frequency, but at different data rates do not interfere with each other, due to the spread spectrum technology used.

The LoRaWAN network server is managing the data rate and transit power for every individual device using an adaptive data rate (ADR) scheme, thereby maximising the network capacity, while minimising the power consumption of the devices.

The benefit of this model is that by adding a new gateway in a dense area, the network capacity is increased by a large factor, because the devices will become closer to a gateway, increase their data rates, and therefore reduce the time-on-air.

LoRaWAN utilizes two layers of security: one for the network and one for the application.

Three classes of devices have been defined, to address specific application requirements:

Class B: In addition to the Class A functionality, Class B devices open extra receive windows at scheduled times.

Class C: These devices have a continuous open receive widow, except when transmitting.

LoRaWAN is not the only long range low power technology on the market. EE Journal has published a nice overview of initiatives in the market. http://www.eejournal.com/archives/articles/20150907-lpwa/

The TTN LoRaWAN architecture distinguishes itself from traditional network server implementations by its distributed nature, preventing single point of failure and single point of control. 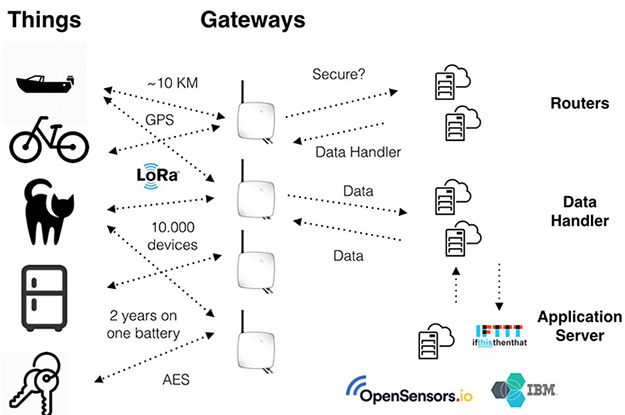 The architecture consists of a set of gateways, routers, brokers and handlers. All these elements are open source projects, and are maintained and operated by the community.

Devices transmit data to gateways. The data sent by devices is received by all the gateways that are in reach. More gateways results in better reliability, allow for decentralization and enables localisation.

Gateways forward the messages they receive to one or more routers (by default to the TTN router). It is the function of the router to discover which broker is responsible for the messages from a specific device.

The brokers verify the integrity of the messages, to prevent spoofed devices, and also perform the function of network server as described in the LoRaWAN standard. This includes the responsibility for the adaptive data rate (ADR) scheme.

The broker forwards valid messages to the handler, that deals with application specific processing, such as en-/decryption of the payload, as well as the join messages in the over-the-air-activation procedure. It also deduplicates the messages received by multiple gateways.

The Things Network is a decentralized network through the use of multiple routers, brokers and handlers which are owned by the community and are independent.

Building the network is done by The Things Network community. Local citizens and companies that want to contribute can buy gateways to build the network.

In six weeks The Things Network Foundation managed to convince enough inhabitants of Amsterdam to purchase and install the latest LoRaWAN network equipment to create a city-wide Internet of Things data network.

The network was launched in Amsterdam in August 2015. A local use case for Amsterdam was chosen. Amsterdam has a lot of boats and also a lot of rain. As a result, boats in the canals can fill up with water and, as a result, sink. To solve this, a device would be made that detects water in a canal boat. If the boat fills up with water, this is detected and sent over The Things Network to the boat owner. The owner receives an SMS. On responding with "Save My Boat" a service called "SaveMyBoat" comes by and clears the water from the boat.

Four weeks later people around the world inspired by the initiative in Amsterdam started doing the same in their cities. Campaigns started in Sao Paulo, Buenos Aires, Boston, Sydney, Kochi and Manchester.

In October 2015 The Things Network started a crowdsourcing campaign to produce more affordable and user friendly equipment for building the network. In 30 days they raised 300,000 euro to start the production of a low cost and easy to use gateway for people all around the world.

Because the team realized convincing the world's population to contribute to the network with a 1200 dollar device was maybe too ambitious, a plan was created to build a 200 dollar gateway that is easy to install, looks good in your living room and runs The Things Network. For the global distribution Kickstarter.com was selected as the platform to crowdfund the R&D and manufacturing costs of the first batch.

Next to the gateway, a development kit and smart buttons were added to the package to make it work out-of-the-box. The development kit consists of a LorRWAN™ enabled Arduino and the smart button is a keychain containing a button that can be hooked on to IFTTT (www.ifttt.com).

Plans for 2016 are making a solid network, building the global community and building use cases on top of them. If you would like to know more about The Things Network, visit their website: www.thethingsnetwork.org.

Wienke Giezeman is a social internet entrepreneur. He successfully founded a video on demand startup (which was sold to a large publisher) and founded Startups for Net Neutrality as an internet freedom activist. In 2015 he founded The Things Network to be the first to build a global crowdsourced physical data network.