The IEEE IoT Initiative Activities Board holds monthly webinars on topics that are beneficial to our members and the general public. We are happy to provide you with this program where you can expand your knowledge of IoT. You are most welcome to join us.

Abstract: The industrial communication market is dominated by Ethernet-based fieldbus systems. Although they share similar requirements and market segments, their implementations and ecosystems differ considerably. As a result, end customers and device manufacturers are faced with a multitude of technologies that need to be produced, run, diagnosed, maintained, and kept in stock. Although the availability of products and services is largely satisfactory, dealing with multiple solutions generates high costs and limits IoT capability and interoperability. This webinar introduces Open Platform Communication Unified Architecture Time-Sensitive Networking (OPC UA TSN) as a new technology and presents the current state of standardization and deployment. This time, the industrial prospects of fulfilling industrial communication requirements while leveraging the cost benefits of standard Ethernet hardware in the midterm are in reach. We anticipate that OPC UA TSN will reveal itself as a game changer in the field of industrial automation, being a candidate for establishing a holistic communication infrastructure from the sensor to the cloud.

Biography: Dietmar Bruckner is with B&R Industrial Automation since 2013, where he is a unit manager in the RnD department System Software. He is responsible for the development (i) of a wide range of Industrial Connectivity solutions based on (real-time) Ethernet, and (ii) of the real-time operating system Automation Runtime for PC and PLC platforms. Before B&R, he worked as a University Assistant (i.e., Assistant Professor) at the Institute of Computer Technology of the Vienna University of Technology, managing research teams in the areas of field busses, building automation, and artificial intelligence.

He studied Electrical Engineering, where he obtained an MSc in 2004 and a PhD in 2007 and passed both degrees with distinction.

The IoT Revolution: Challenges and Opportunities

The Internet of Things (IoT) will bring about tremendous improvements in user experience and system efficiency. It will have a transformational impact on all industries and re-shape business models and industry configurations. An estimated 50 billion connected devices will be deployed by 2020 and the total IoT revenue is expected to grow to $1.2 trillion in 2022. As a result, IoT services are expected to be a key driver for growth in the telecommunication industry. The focus of this tutorial will be on the evolution of cellular technologies to support low-power wide-area IoT services, related requirements, commercial use cases, field experiments and performance results.

Register for this tutorial at IEEE ComSoc. 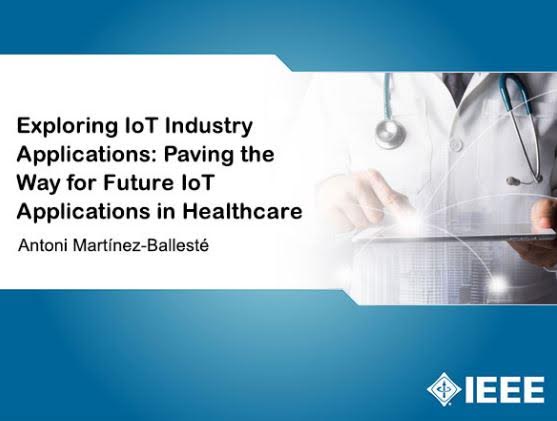 IEEE Guide to the Internet of Things Course Program

New online course program from IEEE covering industry applications for the Internet of Things, along with challenges and future opportunities. Includes topics such as IoT software, limitations of wireless technology, reference architecture and use cases.

IEEE ComSoc Webinar: 5G's Role in the Internet of Things

In this 6+ hour course, viewers get an overview of the smart IoT solutions and services that have been unleashed thanks to recent advancements in wireless, miniaturization of technology, improvement in processing power, standards, and market attraction. Taught by Fawzi Behmann, President of TelNet Management Consulting.

By 2020, the number of internet-connected things will reach or exceed 50 billion. Learn more about the impact of IoT in this infographic from IEEE ComSoc.

An annual survey of the IoT developer community was sponsored by Eclipse IoT, AGILE IoT and IEEE IoT. Thanks to this partnership, 528 participants responded. The report includes developer usage of different IoT standards, technology and industry perceptions.

For a summary of the results, read "Profile of an IoT Developer: Results of the IoT Developer Survey" blog post by Ian Skerrett, Director of Marketing for the Eclipse Foundation.

American Internet pioneer, Vinton Gray "Vint" Cerf, delivered a keynote at the 2nd IEEE World Forum on Internet of Things (WF-IoT) in Milan, Italy. Following his keynote, he answered questions from the audience on the topics of cloud privacy and IoT security.

On 31 May 2016, Jeff Voas, Computer Scientist at the National Institute of Standards and Technology (NIST) and IEEE Fellow, gave a talk on Networks of Things as part of a two-day workshop on Named Data Networking (NDN) at NIST Headquarters.

While at WSIS, Oleg Logvinov, chair of the IEEE Internet Initiative, was interviewed on how ICT supports the 17 sustainable development goals, as well as other topics.

On 26 August 2015, the IEEE Internet Initiative held a live panel where leading industry experts participated in a dynamic discussion on algorithmic decision-making and its impact on our increasingly connected lives. It is now available for viewing on Google+.

IoT and Its Challenges

Watch the keynote speech "IoT and Its Challenges" by Roberto Minerva, chair of the IEEE IoT Initiative, presented at the eHealth Summer University, 1-3 July 2015, in Castres, France.

Keynote: A Market Driven Architecture - The Standard for an Architectural Framework for the IoT

Keynote by Oleg Logvinov, Chair of the IEEE P2413 Architectural Framework for the Internet of Things (IoT) Working Group and Director of Special Assignments at STMicroelectronics' Industrial & Power Conversion Division, at the 2015 IEEE International Conference on Consumer Electronics.

IEEE's main attraction this year is a mind-control racing game. Players wear EEG headsets that analyze their brain waves and help them propel cars down the track with their thoughts.

See more of The Institute's coverage of CES 2015

Video presentations and keynotes from the 2014 IEEE World Forum on Internet of Things are now available for viewing.

This video interview at Cisco’s Internet of Things World Forum in Chicago provides insight on the scope and nature of the Internet of Things (IoT), how IEEE is addressing an architectural framework for IoT, and the top challenges associated with it. Speaking to these topics was Oleg Logvinov, Chair of the IEEE Working Group on IEEE P2413, IEEE Standard for an Architectural Framework for the Internet of Things, and director, special assignments, Industrial and Power Conversion Division, STMicroelectronics; and Mary Lynne Nielsen, Technical Initiatives Director for IEEE Standards Association.

Oleg Logvinov, an IEEE subject matter expert on the Internet of Things (IoT), was recorded at TEDx Taipei Innovation speaking on aspects of IoT including humanization of technology, embedded intelligence and demographic megatrends that will converge in the smart home as a de facto proof-of-concept lab. Oleg serves on the IEEE Standards Association (IEEE-SA) Corporate Advisory Group and the IEEE-SA Standards Board, and is the Director of Special Assignments at STMicroelectronics' Industrial & Power Conversion Division.

Watch the video at TEDxTaipei

The Great Internet of Things Debate

On 2 May 2014, IEEE held an hour-long live Q&A where some of the top IoT experts discussed current progress and future ideas in the field. The expert panel included William Webb, Oleg Logninov, Kevin Curran and Roberto Minerva, moderated by Chris Murphy, editor of InformationWeek. It is available for viewing on IEEE's Google+ page.

NIST is first to ask: ‘What is Internet of Things anyway?’

When Jeff Voas, Computer Scientist at the National Institute of Standards and Technology (NIST), set out to determine the security implications of IoT, he discovered that first he would need to provide a scientific definition. In this podcast, he discusses how his research led him to create NIST Special Publication 800-183 which explores the science, foundation, and security ramifications of IoT.

In this podcast interview (10/21), Oleg Logvinov paints a picture of how and where power will be consumed, and ways we can build a more power-efficient Internet of Things. If our society will have 50 billion connected devices in our future, then we need to start thinking about energy efficiency, not just in terms of silicon efficiency at the device level, but all the way up to the networking technologies, to how we design our apps to talk on the most efficient networks.

Podcast: Meet Four of the Finalists at This Year's Google Science Fair

Eighteen finalists from more than 120 countries came to California to compete in the final round of the 2013 Google Science Fair. This event brought kids from around the world to open their eyes to the problems around them and turn to science to find the solutions.