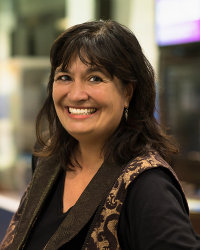 Kathy Herring Hayashi is a Senior Member IEEE, founder and chair of IEEE San Diego Women In Engineering, a computer science instructor at Palomar College and an independent software professional. In this interview, she connects her experience in semiconductors with the development of the Internet of Things (IoT).

Question: How did you enter the computer science field?

Hayashi: When I went to high school in California, way back when, there were no computer science classes. When I got to college, it was general education for two years. Then I had to pick a major. I had taken a class titled Introduction to Computer Science at the University of California-San Diego and had enjoyed using a program to create a little flower in the computer class. I thought that was fun. So my advisors suggested a computer science major.

So I went into computer science. I went to lectures with hundreds of men and perhaps two women, including me, in every class. I’d been valedictorian in high school and I did well in math and science, which helped with computer science.

But I certainly wasn’t prepared for being a minority in most everything that I did in college. That affects you when you are looking for lab partners, for study groups, etc. At graduation, I saw an opportunity at Unisys Corporation where I could actually work with semiconductors and software.

Question: Were there any lessons learned in terms of the direction that you took and the strength of your momentum going to Unisys right out of school?

Hayashi: I loved the technology. I loved what I was learning. But it was daunting because sometimes I wondered if maybe this wasn’t something that women did. But when I graduated and went to work I was in a pretty diverse group within Unisys Corporation and I got that comfort level back. But it isn’t always that way. Unisys was a special company.

Question: Was your love of the subject your anchor in clearing hurdles?

Hayashi: It was always my anchor and that remains true today. You put up with a lot sometimes. But when you go back and see what’s going on with the Internet of Things, with autonomous cars, with drones and robotics, it brings me back to my essential purpose every single time.

For instance, I recently attended a two-day, Women in Engineering technology summit. Every once in a while I just have to stop work for a day or so and attend events that focus on the technology so that I can remember why I came here in the first place. It’s the technology that drives me.

Question: When you entered the semiconductor business in the early 1980s, what were the opportunities like?

Hayashi: When I joined the semiconductor R&D CAD department at Unisys in 1982, we were working on semiconductor HDLs – hardware description languages – before common HDLs were being written. Fresh out of college, I was writing our own HDLs, our own languages, our own parsers, our own behavioral structure synthesis tools. When I was designing those blocks, we were actually designing it front to back. We wrote the HDL. We did the synthesis. We did the compilation. And then we saw it on the tester when we were done. We did everything. We wrote the software. We did the design. We had a sense that we were on the ground floor of an industry that was just taking off. Nowadays, in today’s environment you can only do a portion of it all. It wasn’t until later that an actual EDA – electronic design automation – industry emerged with specialized companies to serve it. EDA, essentially, is semiconductor software.

Question: How have the opportunities for young engineers changed since then?

Hayashi: Back in that day it was just amazing – I was writing the software that I was using as an engineer from front to back. In today’s environment you can only really work on a portion of the entire design process. Today, if I wanted to work on the chip I’d have to pick a portion of that chip and work on it within a design team. If I wanted to do verification I would join a verification team and so forth. Complexity has wrought specialization.

Question: What have you seen in terms of the arc of women’s involvement in technology companies over the past four decades?

Hayashi: When I joined Unisys I was the youngest on the team. But then women started to leave. Suddenly, I was one of the older people; I was looking for mentors and they were gone. They had left for a variety of reasons. They either transitioned to another industry with more opportunity for advancement or because they decided to leave for their families, which is a great reason. Many of them went to nonprofits.

I went part-time while I raised two beautiful children. I had to keep one foot in technology the entire time. But I couldn’t let it go because, in my perspective, if I stopped working in the industry it would go on without me and often it’s hard to get back in. My humble advice is to keep one foot in the industry, network, take classes, stay involved somehow, because the technology advances so quickly that re-entering the workforce where you left off is very difficult.

Some of the things that I do – such as Women in Engineering – are to maintain visibility so that as young STEM (science, technology, engineering and mathematics) students come through I can provide honest guidance. The opportunities are amazing. The technology is amazing. But women must support each other and network with each other to move forward. We need to keep the pipeline open and flowing, bringing in more people.

As women, our skills are needed. But we have to make an extra effort to be seen. So I’m very active in IEEE. I’m active in teaching. Now I’m doing everything I can to make sure that young women see women working in technology. We are passionate about technology and we’re still driving it.

In fact, in September we hosted the inaugural IEEE Women in Engineering technology summit focusing on emerging technologies. With over 200 attendees, we discussed IoT, biotech, virtual reality and more to inspire, engage and network with local technologists..

Question: Let’s pivot to your view of the future of semiconductors. What are the challenges and opportunities in that space, particularly in light of the emerging technologies you just mentioned?

Hayashi: Semiconductors are making another “great leap” again. Just to recap, at first we were building chips for mainframe computers. Then my first project was mainframe-on-a-chip. Then chips powered personal computers and, suddenly, the Internet arrived. Then it was mobile devices.

Today, logic and processing are being implemented and integrated in the gamut of industry verticals in a variety of roles, often tied to the IoT. We’re talking medicine, education, finance, healthcare, science, applications such as connected cars, autonomous vehicles, virtual reality. I’ve even attended a conference panel where they said, “What you really need to do as semiconductor engineers is learn more about the brain. Go into the neurosciences.”

Each vertical has different requirements and we’re going to need specialists in each one of those areas for customization. And capabilities and cost will continue to play a role. Semiconductors in mobile phones need to provide versatile functionality for only, say, a year or two. In contrast, semiconductors in automobiles must be secure and relevant or adaptable for more than five years.

In terms of semiconductor production, the demand for low-cost, low-power, low-level processing at the network’s edge will drive us to use older process nodes. The trend has been to shrink the process node to manufacture smaller, cheaper chips. Today, we’re working on very small, ten nanometer and below process nodes. One aspect of IoT is that we can reuse old fabrication designs because those edge-of-network sensors will work for certain applications.

These issues were articulated and debated further at the recently held IEEE Technology Time Machine conference, 20-21 October 2016, in San Diego, Calif., where speakers and panelists with very diverse backgrounds discussed how technology can be consciously shaped to serve our future needs.