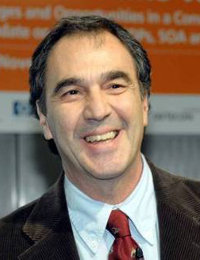 Roberto Minerva is the Chairman of the IEEE Internet of Things (IoT) Initiative aimed at creating within IEEE a large technical community in order to leverage the knowledge and skills available within IEEE. He is an IoT subject matter expert and discusses the opportunities being created by the IoT Scenarios initiative. Roberto is also on the organizing committee for the second annual IEEE World Forum Internet of Things, which will take place December 14-16, 2015, at the University of Milan, Italy.

Question: What was the primary reason for creating this resource?

Roberto Minerva: We need to better understand the possibilities of the Internet of Things (IoT), and to do that we need to collect a large number of IoT scenarios and applications so that we can see how broad it is and what are its real possibilities. There are a lot of people saying IoT will change the way people are living, but we need to provide practical examples in a manner people will understand. We also need to illustrate the difference between some simple applications and more complex IoT scenarios.

Question: Why is the IEEE in the best position to facilitate sharing of these scenarios?

Minerva: IEEE is in a unique position because there is a wealth of academic and industrial knowledge to leverage within IEEE. It stems from the many societies involved in IoT; they can provide us with different perspectives from different technological domains. What’s more, there is the possibility to also catch business and societal related insights. Scenarios and Use Cases are a means to represents the IoT possibilities. We will be able to share scenarios about connected cars and vehicle-to-vehicle communication as well as the possibilities in eHealth and the medical sector. We can also talk about the societal implications of IoT scenarios. IEEE brings together a lot of different domains and technologies so it’s able to provide a multifaceted view that is difficult to find in other organizations or communities.

Question: How do you see the portal and the scenarios you gather being different from other online resources devoted to IoT?

Minerva: IoT Scenarios will be different because we are being flexible and not requiring a great deal of detail to participate. We want to catch up with the ideas that the community can provide, and then contribute to refine and make them sounder. It can be a simple description of an IoT project or application with suggestions as to who might use it and who the stakeholders are. We are also open to a wide a range of contributors, whether industry, academia or a single individual that is doing an IoT project. We’re also interested in sharing more detailed reference implementations, and we can help contributors tune their designs by giving them an opportunity to solicit feedback from the community. We’re different in that other resources are not focusing enough on real IoT usage, and we are open to any industry segment. We want to provide good information to the IoT community and get the IoT community sharing feedback and ideas.

Question: How does offering this resource fit in with other IEEE IoT initiatives?

Minerva: The Smart City initiative is the first one that comes to mind because the IoT scenarios are relatable to a lot of people and there are lot of scenarios that could showcase functionalities and inspire discussion on their implications. Those involved in the Big Data initiative will be interested in understanding what type of data will be produced and what data would be mined. And then there are those who are looking at how to support the communications needs of sensors and microchips that are distributed all over the place in IoT scenarios. There is a strong marriage between IoT and big data because if there are a lot of sensors, a great deal of data will be produced.

Question: Do you have any advice to those wishing to share their IT applications and scenarios?

Minerva: We don’t want people to feel as though they need to submit a formal, rigid document. And they don’t need to write a book. If they have an interesting idea related to IoT and they want to share it in terms of functionality of the service, in terms of stakeholders, or in terms of a reference implementation, they should feel free to provide as many details as possible. Or they can just sketch out an idea. If a large organization provides multiple scenarios, we could potentially develop a page for all of their contributions. The idea is to contribute to the community, to make the scenarios available to the community and solicit comments from the community.